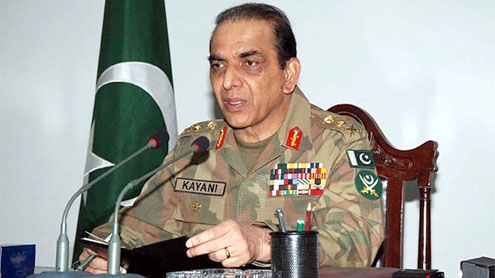 COAS General Ashfaq Parvez Kayani has suspended the command and chain system and authorised the troops posted on the Pak-Afghan borders to respond with full force if they come under attack by the NATO forces.

The officers there need not wait for instructions from the high command and act on their own to counter any aggression and, in case they need any help, they would be provided all kinds of assistance asked for. The General’s command, though quite unusual, comes as the nation mourns the death of at least 24 of our soldiers by NATO helicopters. It constitutes the right response to the situation created by the unprovoked and ruthless attack on our checkposts by so-called allies last Saturday.

At the same time, General Kayani’s orders chime in with the sentiments of the people of Pakistan, fed up with the lacklustre response to previous such attacks and asking for a radical review of policy to demonstrate that Pakistani armed forces can defend the motherland as a result of consuming nearly a hefty part of the tax payer’s budget.The truth is that the dilemma Pakistan faces at the moment deserves no accommodation for those who have caused it and who refuse to apologise. Ambassador Munter’s advice to his government was sincere and true and in the best interests of the United States with regards to its relationship to Pakistan in light of recent events.

A pity that it went unheeded. The insolence of publicising that President Obama would not be offering an apology for the daylight murder, added insult to injury. There is no justification for letting NATO supplies pass through our land, nor any point in agreeing to participate in the Bonn conference on Afghanistan. The Prime Minister’s remark that we cherish our sovereignty and independence and the government’s determination in refusing to accept the American plea that the attack on the checkposts was a case of mistaken identity are, indeed, appropriate.

In the meantime, the country’s eastern front is seeing increased activity, with Indian armed forces getting ready to undertake exercises with 50,000 soldiers, 500 armoured vehicles and jet aircraft and other war paraphernalia in the Rajasthan area adjoining Pakistan. Even then, apologists will continue trying to convince the nation of the good intentions of such war exercises. It is time they and those in the government who hold such views opened their eyes and saw the threat that faces, from the East and now also from the West. – Nation