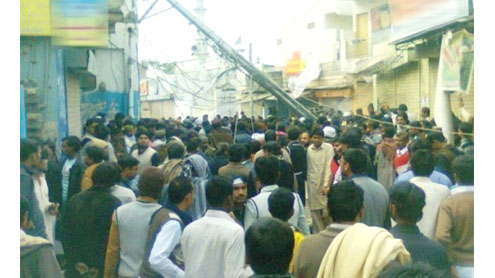 This year, it seems, has started with a bang. A deadly sectarian attack has taken the lives of 18 mourners and injured over 30 in the chehlum procession of Hazrat Imam Hussain (AS) in Khanpur.

The suspected homemade remote control bomb was hidden near an electric pole, which went off as the procession reached the location. Initially, the district police officer confused the people by claiming that an electric transformer exploded as an alam (flag) had hit it. However, later he had to admit that it was a bomb blast as according to the electric supply company there was no transformer installed in the vicinity. There is also a report claiming that it was a suicide attack.

The brutal incident in Khanpur is indeed an atrocity beyond measure to say the least. Why the security of the procession was not ensured is a question that remains at the forefront. The occasion of Hazrat Imam Hussain’s (AS) chehlum is one of the main religious observances of the Shia Muslims, which amplifies the threat of sectarian attacks and violence against this religious minority, which off and on takes place across the country. Owing to this regular pattern of structural violence, this time the law enforcement agencies had concentrated more on the security of the bigger cities, particularly Karachi, Lahore and Quetta that had witnessed many such attacks in the past, than the smaller towns.

The saboteurs took advantage of this approach and succeeded in carrying out their nefarious plan in Khanpur against the Shia community. On the same day, in another incident of sectarian killing, unidentified armed men riding a motorcycle gunned down a security guard deployed outside an imambargah in Quetta. Despite claims of tightened security on the sensitive occasion, sectarian killing took the lives of 19 people in total across the country. It is beyond understanding why a similar kind of ban on pillion riding was not imposed in Quetta as the one imposed in Karachi and Lahore on the day. The history of sectarian carnage and violence in Balochistan is old enough to be taken for granted on this occasion.

There is a need to keep in mind that we are in the middle of an asymmetrical war. The groups involved in sectarianism have gained strength since they have joined the Taliban and al Qaeda. Attacks by saboteurs can be expected any time at any place and mass gatherings such as this always become vulnerable to such deadly attacks. In these circumstances, we need special security measures. It is, no doubt, inherently difficult to guard each and every nook and corner of the country. However, given the past record of the elements involved in sectarian bloodshed, the threat of a deadly attack on the mourners’ processions was well anticipated.

The local police of Khanpur, though understandably small in number, could have at least ensured security clearance of the route of the procession. Alas! They made no anticipatory efforts to minimise the security threat posed to the lives of hundreds of innocent mourners. That was why people got infuriated and attacked the police station and the Rangers had to be called in to control the law and order situation in the unfortunate city. It was indeed a sad day and will always be remembered by the victims of the aggrieved families for the lifetime loss that this blast has caused them. However, bringing the culprits to book and taking the local police to task for its lax attitude, which let the saboteurs to carry out the brutal attack successfully, may help to reduce its intensity. – Dailytimes