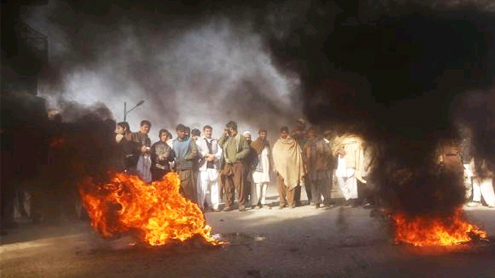 As though things were not difficult enough for western forces in Afghanistan, the incident of the Quran being burnt at Bagram air base has really put the cat among the pigeons. Thousands of Afghans have protested against the desecration of the Holy Book, at times turning violent and attacking western bases and installations.

Two American soldiers have been killed by an Afghan soldier, and at least 12 protestors have lost their lives. The protests show no sign of abating as these lines are being written, and it is difficult to predict how this will play out eventually. The incident has come as a Godsend for the Taliban, who have exhorted Afghans to kill westerners, while their spokesman has at the same time said that the Qatar process of negotiations between the Taliban and the US would not be affected by the unfortunate incident. President Barack Obama has promptly sent a letter of apology to President Hamid Karzai, regretting the incident and calling it accidental. He has promised action against those responsible. The despatch with which the US president has responded in this case is glaringly different from the apology demanded by Pakistan for the killing of 24 of its soldiers in Salala, an apology that is said still to be ‘in the pipeline’. That glaring difference is an indicator of the seriousness of the reaction within Afghanistan to the desecration. Whether Obama’s apology will be sufficient to cool Afghan anger, however, remains difficult to ascertain, such is the angst unleashed by the incident amongst the religiously sensitive Afghans.

It is amazing that in spite of reported instructions issued to American soldiers regarding cultural and religious sensitivities, the US soldiers in the field in Afghanistan are either “ignorant” (as Obama put it in his apology letter) or just plain downright stupid. Clearly, nothing has been learnt by the US military from similar reported incidents in Guantanamo Bay prison and Iraq. In this respect, the US soldiers are their own worst enemies. The difficulties confronting US/NATO forces in the run up to the 2014 troops withdrawal have suddenly turned even more serious. At the best of times, candid off the record views of western observers admitted that in Afghanistan, the west is reduced to hoping against hope that all will go well up to and including the 2014 withdrawal. And all this kerfuffle is made worse by the fact that Pakistan-US relations continue to remain in a state of paralysis, creating more pressures on the western forces’ supply and logistics (Pakistan has still not reopened the supply routes to Afghanistan) and casting doubts on the ability of the US/NATO forces to negotiate a dignified withdrawal from Afghanistan while not leaving a total mess behind. US Secretary of State Hillary Clinton and Pakistani Foreign Minister Hina Rabbani Khar’s interaction on the sidelines of an international conference on Somalia in London led to all the usual noises from both sides about getting their relations back on track, but the Pakistani parliamentary review of relations and terms of engagement seems subject to delay while the Senate elections loom.

A joint session of parliament is supposed to be convened to visit the recommendations of the parliamentary committee on national security regarding the matter, and only after parliament decides the way forward will the diplomats on both sides be able to get down to the business of hammering out the details. US Special Representative for Pakistan and Afghanistan Marc Grossman is still cooling his heels waiting for an invitation to visit Pakistan for discussions, as is General Dempsey, Central Command chief. Having shot itself in the foot in Afghanistan because of the Quran desecration incident, the US is not exactly on top of its game with Pakistan or in the region as a whole. If there is a lesson to be learnt from all this, it is quite simply that foreign wars and occupations eventually exact a high toll. Old-style imperialist intervention to police the world in the interests of the great powers is an idea that is, to put it politely, passé. *

On Thursday, a car bomb took the lives of 15 people at a bus stand in Peshawar. Officials believe it was a retaliatory attack by the terrorists because of the military operation in Khyber Agency. Many vehicles and shops in the vicinity were also destroyed. On Friday, suicide bombers attacked a police station in Peshawar, resulting in the deaths of four officers. Peshawar police chief Imtiaz Altaf said the Taliban terrorists wanted to occupy the police station but failed. Pakistani Taliban spokesman Ahsanullah Ahsan claimed that the suicide attack was carried out by an affiliated group, the Abdullah Azzam Brigade. This latest attack was in retaliation for the death of a Taliban commander in a drone strike this month. It seems that there is a concerted effort by the Taliban to terrorise the city of Peshawar and this may just be the beginning of a new bombing campaign after a lull. While the second attack may have targeted the security forces, the first one killed civilians. Terror by its very definition is indiscriminate and the terrorists do not care who gets killed in their attacks. It is important that the security of Peshawar be beefed up, even in police stations. More retaliatory attacks by the Taliban may be in the offing. There needs to be alertness on the part of the security forces.

We must understand that the country is up against fanatics in a life and death struggle. To safeguard the people of Pakistan, the security forces must take the terrorists out and not relax even during a lull in terrorist attacks. Terrorists should not be allowed to walk in as they please into police stations or other places. Granted that it is not easy to stop suicide bombers from carrying out their nefarious activities, but an effective crackdown against the terrorists must ensue. The people of Peshawar and adjoining areas have suffered the most in the war on terror. Their blood must not go in vain. The military must stop its covert and overt support of terrorists, be it the Afghan Taliban or other jihadi groups. This policy has already cost us in terms of lives, money and our image in the international community. Now it is threatening the basic fabric of our society. Eliminating terrorists from our soil is a must. – Dailytimes