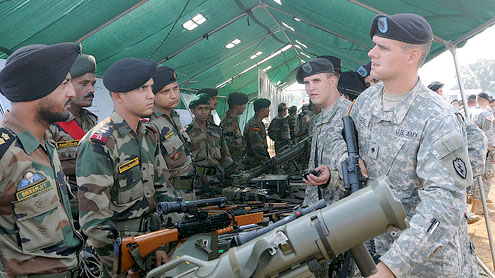 India has begun a joint military exercise with the US close to border with Pakistan. While the obvious purpose of these exercises is to flex its military muscle against Pakistan, it is part and parcel of Indian military doctrine to invariably keep us under pressure with such war games.

It is strange that US is siding with India in such ventures especially since it claims to be an ally of Pakistan. It is quite a shame to note the brazenness with which New Delhi has been pursuing its armament programme particularly the induction of nuclear submarine. The impression that Indians try to create is that they are undertaking these measures to rival China’s rise as the global power but that is only ridiculous.

As these war games on the Pak-India border show, India’s real focus is Pakistan. The successful test firing of the nuclear capable Hatf-II by Pakistan on Monday however, comes as a relief since it would help check Indian designs in the region. Under circumstances of the sort, we are left with no other option but to keep our sinews of war ready for any contingency arising out of Indian hostility. – Nation