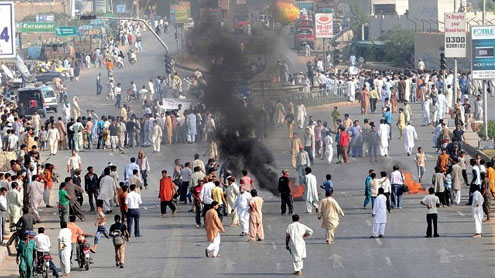 The protests in Punjab over the hours-long power outages tell the same miserable tale as that of other parts of Pakistan. Unwise and shortsighted official planners have unleashed the menace of electricity load shedding and even gas outages.

The duration of power load shedding spans four to five hours at a stretch in the urban areas while rural areas suffer even more with the most remote areas facing up to 18 hours of load shedding. The impact of the acute shortage of one of the essential utilities is not hard to imagine. From farming to industry, almost every sector has suffered from a production rollback. The monster of unemployment is looming even larger with inflation fuelling devastation. Unless the government comes up with a real solution to this problem, protests will continue, possibly leading towards a massive social breakdown.

At this time, there is a need to understand the real issue and all the political leaders should avoid issuing statements that only serve to provoke the protestors. The Punjab Chief Minister’s rhetoric that injustice is being done to Punjab is uncalled for, as the power situation is the same throughout the country. According to PEPCO, at present its power generation is 7,800 MW lower than its actual capacity while the total demand stands at over 14,500 MW.

The general public is facing a deficit of 6,700 MW, which grows to almost 9,000 MW when power exemptions for VVIP connections and defence installations are added to the equation. Statistics reveal that more than 60 percent of the country remains without power for over 60 percent of the time. According to experts, an amount of up to Rs 300 billion accumulated over the years as circular debt is stopping the power producers from utilising their full generation capacity. Owing to the massive protests, the president has ordered the clearance of outstanding dues worth Rs 152 billion to the IPPs, oil and gas companies to ease the situation. However, its impact does not seem to last for long as some payment was also made by the government a while ago but it could not solve the problem.

Our main roadblock is circular debt, which should be removed in collaboration with the banks. The Sui Northern Gas Pipelines Limited (SNGPL) has been directed to divert gas supply to power producers from the industrial sector. This policy has an inherent flaw. Our textile and fertilizer sectors are helpless without gas. Its supply as a fuel to power plants seems an unwise use of this already scarce commodity. At power plants, furnace oil should be used as we have sufficient generation capacity. The need of the hour is to sort out the whole mess with wisdom. – Dailytimes