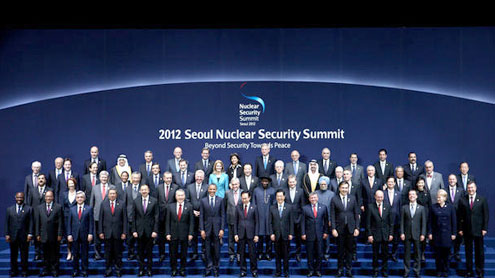 At the two-day international Nuclear Security Summit in Seoul, South Korea, Prime Minister Yousaf Raza Gilani has been making his pitch for Pakistan to be given access to nuclear technology for peaceful purposes on a non-discriminatory basis.

He argued that nuclear technology was required to meet Pakistan’s growing energy needs. The National Command Authority, Gilani revealed, had approved a Nuclear Power Programme for 2050 to increase energy production from nuclear sources. Pakistan, he went on, had taken effective measures to enhance nuclear security. Underlining the importance of the second Nuclear Security Summit being held in Seoul, the prime minister expressed the hope that the Summit will lead to breaking new ground on the evolving global nuclear security architecture, the role of the International Atomic Energy Agency (IAEA), and protection of nuclear materials and radioactive sources.

He pointed to the IAEA’s approval of the safeguards agreements of the two civil nuclear power plants (supplied by China) as reflective of the world’s continued confidence in the safety and security standards of the country. The agenda the Summit has set itself is reducing the threat of nuclear terrorism through curbing trafficking and improving the security of nuclear installations.Pakistan is vying to be accepted internationally as a responsible nuclear state, one deserving membership of the Nuclear Suppliers Group (NSG).

This is not an easy task, given the bad track record of the country vis-à-vis nuclear proliferation.It may be recalled that Pakistan stands accused of passing on nuclear know-how to North Korea, Iran, and Libya under Gaddafi. After Musharraf persuaded Dr A Q Khan to fall on his own sword and accept responsibility solely, Pakistan has been trying to regain its lost
reputation in this regard. Some water has flowed down the rivers since that ignominious episode, but the world will still need persistent persuading that Pakistan has turned a corner and should no longer be looked at with suspicion or reservations. Gilani even offered to train nuclear experts in Pakistan, another effort to indicate that Pakistan had nothing
to hide (unlike in the past). Pakistan’s track record and its recent coming closer to Iran on the gas pipeline, purchase of electricity from Iran and enhanced trade and economic cooperation could negatively impact its diplomatic efforts on the civilian nuclear use issue.

It should not be forgotten that the most powerful country in the world, the US, frowns upon Pakistan’s closeness with its neighbour, accused as Tehran is of pursuing nuclear weapons. The US has refused to commit on whether it will treat Pakistan’s request for nuclear technology sympathetically or not if and when Islamabad applies for it.Nuclear power has of
late become even more controversial after the Fukushima disaster in Japan. Many states, including developed ones, are backing away from or not as vigorously pursuing nuclear power. Safety standards may have improved in the nuclear industry, but the immensely powerful elemental forces of nature mankind is trying to tame have the potential at any given moment to cause immense damage and loss of life.

Then the problem of disposal of nuclear waste (an inevitable by-product of the nuclear fuel cycle) has yet to find satisfactory resolution, given that such waste decays over thousands of years. There is no doubt that Pakistan is facing a critical energy crisis that is causing immense losses to the economy. Pakistan cannot therefore put all its eggs in one basket. With the caveats outlined above regarding safety, if Pakistan pursues its nuclear power goals, it must not shut its eyes to the need for a diverse energy mix to overcome the country’s energy deficit. We tend to resent India’s success in getting a civilian nuclear deal from Bush. But we must pursue friendly countries like Turkey to help us in the conventional energy field while continuing to engage the world on nuclear energy issues. – Dailytimes