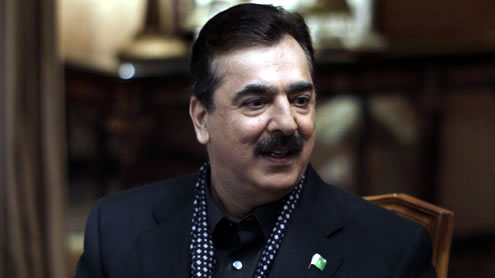 One day after being convicted and symbolically sentenced for contempt till the rising of the seven-member bench of the Supreme Court (SC), Prime Minister (PM) Yousaf Raza Gilani appeared in confident, fighting mood in his appearance in the National Assembly (NA).

In a hard-hitting defence from the floor of the house of his stance on the conviction and a host of other issues highlighted by the verdict, the PM raised some pertinent points. He took the Leader of the Opposition, Chaudhry Nisar, to task for challenging the treasury benches to bring the PM to the house.

The PM’s advice to Chaudhry Nisar and others of his ilk was to avoid trying to play God. He argued that, as the PML-N chief has stated, even if you do not recognise me as the PM, I am still a member of the house and cannot be prevented by threats from attending the sessions of the NA. The PM questioned why the judiciary had never in our history put military coup makers and dictators in the dock. He pointed to the infamous doctrine of necessity formulated by the judiciary, which led to the condoning and justification of all coups in the country’s history. He said he had only defended the constitution as a member of a party that had not only formulated the 1973 constitution but also restored it (considerably) through the 18th Amendment. He further asserted that all the constitutions of the country, the 1956, 1962 and 1973 constitutions promulgated immunity for the president of the country. Therefore, by implication, the demand of the judiciary that he write a letter to the Swiss authorities to reopen the alleged corruption cases against the president would be in violation of the laid down immunity for the president while in office, an immunity that exists for all heads of state internationally. Had the immunity not been laid down in all the constitutions in the country’s history, the PM argued, the demand to ignore the clear provisions of Article 248 might have had some weight and value. As things stood, his view and the view of the government’s legal experts was that this was not possible under the long standing and consistent immunity available to heads of state while in office. The PM reiterated his view that parliament is supreme as it expresses the will of the people and all other institutions of state receive their legitimacy and standing from parliament.

The contempt verdict has split legal, political and all other circles right down the middle. The division in the political field corresponds to the PPP and its allies in one corner, while the parliamentary and extra-parliamentary opposition stands on the opposite side of the ring. This was also visible in the NA on Thursday when the house descended into scenes reminiscent of a fish market, much to the discomfiture of the Speaker and all those who fear such scenes erode the sanctity of parliament and thereby depreciate democracy itself. Demands have been raised by Nawaz Sharif, Imran Khan and others, both with a presence in parliament and outside it, for the PM to resign immediately. The first named has gone so far as to say that the government must immediately appoint a non-controversial caretaker PM to conduct the coming elections, who should also write the SC’s desired letter to the Swiss authorities. Ironically, forgetting to even glance at his own past track record, Nawaz Sharif attempted to take the high moral ground by accusing the PM of ridiculing the judiciary. Politics does require thick skins, but this must rank as close to taking the cake. No wonder after the SC verdict against him, the PM in a lighter mood remarked that politics is like watching a “horror movie”.

The government, its allies and the PPP seem to be in no mood to roll over and die after the contempt conviction. Apart from filing an appeal against the verdict and allowing the process after that appeal is exhausted to take its course, the PPP-led government, given its strength in both houses of parliament, still retains the ultimate weapon, as hinted at by Chaudhry Aitzaz Ahsan: legislation to nullify the effects of the SC verdict and bring an assertive judiciary within the fold of restraint required by all institutions of state in their relationship and working with, not against, each other. * – Dailytimes