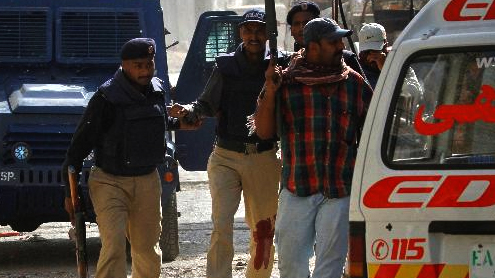 For at least three days running, the Lyari area of Karachi has been turned into a battlefield. The police moved in in force some days ago after a PPP local leader, Malik Mohammad Khan, was killed while leading a protest against the prime minister’s conviction by the Supreme Court in the contempt case. The People’s Amn Committee (PAC), previously aligned with the PPP but banned in the wake of the Dr Zulfiqar Mirza furore, stands accused of the murder.

PPP leader Nabil Gabol was also reportedly targeted by a grenade attack but escaped unhurt. The police seems to have attempted to ‘conquer’ the area from the direction of Cheel Chowk, but has got bogged down because of fierce resistance from alleged gangsters. The resisting elements are now freely using rockets and hand grenades, in which a police APC was hit, killing an SHO and a constable and wounding three other policemen. At the time of writing these lines the death toll in the fighting had climbed to at least 19, with many more wounded. Even media reporters and cameramen covering the fighting were not spared, and at least two were injured by a rocket attack. The ‘siege’ of the area has left residents hostage, with food and other supplies rapidly dwindling and the fear induced by constant firing made worse by uncertainty regarding a resumption of supplies. Those lucky enough to do so have fled the area, but the bulk of residents are still trapped between the law enforcement and opposing forces.

The authorities are consistently blaming the trouble on criminal elements, but knowledgeable observers point to political factors complicating what may not be just a simple ‘law and order’ operation. That operation has in fact been continuing almost throughout April, starting with the demand raised by MQM and acceded to by the PPP to conduct a targeted operation against extortionists in Lyari. There are reports in the media that the MQM was incensed when these ‘nouveau’ extortionists began muscling in on areas that hitherto were an exclusive MQM preserve. Thus an ‘extortion war’ started between the old and the new extortionists, with the former finally succeeding in pressurising the PPP to launch the operation that is continuing. The PPP, in an effort to mollify its coalition partner in the Sindh government, chose to conduct the operation exclusively in an area that traditionally has been considered a PPP stronghold. Local residents of Lyari, most of whom are Baloch, resented the PPP’s acceptance of the MQM’s demand at a time when it is hardly a secret that extortionist activity is ongoing in almost all areas of Karachi. Had the PPP-led Sindh government launched simultaneous actions against all extortionists in Karachi without fear or favour, the operation may not have run into the controversy it has amidst accusations by Lyari residents that the PPP had abandoned them just to please the MQM. The PAC was banned after former Sindh home minister Dr Zulfiqar Mirza was sidelined in the context of his campaign against the MQM. Now the police is being resisted, it is said, by both criminal and political elements (including the PAC). What makes the operation even more controversial is the alleged use of some gangs cooperating with the police against others resisting the operation. This is a formula that is likely to harden the divide and exacerbate the ‘gang wars’ in the area.

These developments have alienated not just the PAC or similar political elements in Lyari from the PPP, even ordinary residents have blamed the PPP for their woes. It is being conjectured that the PPP has either lost or is in the process of losing its Lyari stronghold, putting the plan to elect Bilawal Zardari Bhutto from a seat in Lyari in the next elections under a shadow of doubt. The current but reportedly on his way out Sindh Home Minister, Mansoor Wasan, refused to be drawn by media questions on the Lyari operation, deflecting all such queries in the direction of Chief Minister Qaim Ali Shah, who reportedly has taken the portfolio of home minister under his own control. However the Lyari operation eventually turns out, its political fallout seems set to damage the PPP in perhaps its only remaining stronghold in Karachi. The political vacuum created y the retreat of the PPP from the area is likely to be filled by political and perhaps even criminal elements that could cause headaches in future to not only the PPP, but also the law enforcers involved in the operation. – Dailytimes