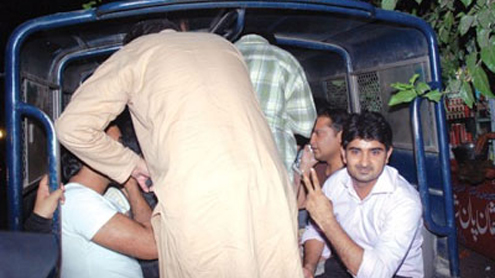 Any slight hope of a peaceful solution between the protesting young doctors and the Punjab government has come to a grinding halt after Sunday night’s crackdown on members of the Young Doctor’s Association (YDA), with the Punjab police carrying out violent raids.

A meeting of the General Council of the YDA was being held at the Services Hospital doctors’ hostel in Lahore after the mediatory efforts of senior doctors failed when policemen charged in, beating the doctors and hauling them off for detainment. The President of the YDA, Dr Hamid Butt, was also arrested. Another raid at the Ganga Ram Hospital saw the police beat a doctor so viciously that he now lies in critical condition in a hospital. The Punjab government has declared that it will have no sympathy for the striking doctors who have been protesting against the anomalies in their service structure, lack of job security, inhumane working hours and delayed, inadequate wages.

On the orders of Chief Minister Shahbaz Sharif, the provincial government has decided that the protesting doctors will be terminated and they will be made ineligible for public service in the future. It has also expressed its intent to inform foreign governments that could be the dismissed doctors’ destination for alternative jobs not to employ them. The Punjab government has decided to recruit 1,000 medical officers in place of the doctors on strike and doctors from the Army Medical Corps have arrived to start treating patients in the abandoned wards and OPDs of Punjab’s main government hospitals.

All in all this is a very dismal situation. The YDA and the Punjab government were in the very same place last year when the doctors made these same demands. After much commotion the Punjab government agreed to meet the demands of the doctors, promising to raise their salaries and negotiate the flawed service structure. More than a year has passed and the doctors, it seems, are fed up of being given false promises — their salaries remain meagre and their service structure is such that they may as well be taken for granted. This has led to so much mistrust in the government of Shahbaz Sharif that the YDA is not interested in hearing what fresh promises the government throws its way. One does not understand why the government made lofty promises to these aggrieved doctors in the first place if it had no intention of living up to them.

Now that the doctors are asking for accountability for these promises they are being bullied into calling off the strike by force. While no one can deny the plight of poor patients who are being turned away from empty hospitals due to the ongoing strike, the mistreatment of those who work in one of the most demanding of vocations deserves condemnation. Being humane only goes so far and the doctors cannot be expected to treat patients when they are not reimbursed adequately — that is just exploitation. The Chief Minister Punjab needs to understand that not every issue can be dealt with in his usual aggressive, authoritarian manner.

The doctors are people protesting because they have grievances, because they were promised proper treatment and have been let down. They are professionals who should be respected, not treated as though they were criminals who must be crushed. The chief minister would do well to remember that the democracy he so loudly champions allows for protest and public dissent. To crack down so aggressively on one of the respected services of the state is going to do no one any good, least of all the Punjab government itself. -Dailytimes