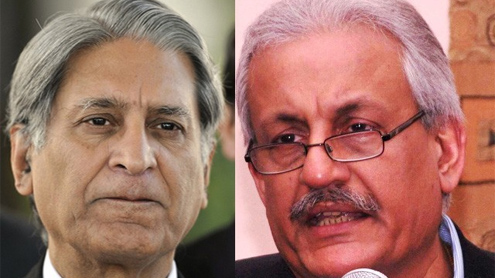 The introduction in the Senate of the bill to allow dual nationality holders to run for elections has proved divisive and sparked off a controversy both within the PPP and its coalition partners, as well as in the opposition.

The PML-N and the ANP, the first the main opposition party and the latter a coalition partner, wanted the sense of the house ascertained before the bill was sent to the relevant parliamentary committee. However, after a lively debate, when Senate Chairman Nayyer Hussain Bokhari decided to send the bill to the Senate Standing Committee on Law and Justice, this triggered a walkout by both these parties. From within the PPP’s ranks, two legal luminaries, Senators Raza Rabbani and Aitzaz Ahsan both expressed reservations on the bill, particularly pertaining to the inclusion by Law Minister Farooq H Naek of the US in the list of 16 countries with which Pakistan has agreements on dual nationality on the ground that the nationality oath of the US included a commitment to bear arms for the US.

Farooq Naek argued that Article 63(1)(c) of the constitution was unfair to those holding dual nationality, precluding their running for election despite being allowed to vote. He pointed out that 90 percent of dual nationals acquire their additional nationality for reasons of employment and/or business. There was no reason, he stated, to doubt their allegiance to the home country. During the debate, remarks such as the bill being an injustice to and a joke with the country were aired. PML-N Senator Zafar Ali Shah echoed the views of the Supreme Court (SC) on the issue by cautioning that allowing foreign nationality holders to run for elected office could open the door for such people to become the minister of defence or even the prime minister, ignoring in the event the fact that we have had prime ministers holding foreign nationality such as Moeen Qureshi and Shaukat Aziz in the past.

The issue never came up before, and certainly not until the SC decided to weigh in by suspending the membership of some MNAs and Senators. Meanwhile, in a related development, adviser on interior Rehman Malik resigned from the Senate. He had been suspended by the SC for having run for election before he renounced his British nationality and was unable to satisfy the court despite producing a certificate of renunciation. In a statement explaining his decision, Rehman Malik said there were those who were painting the bill as aimed at protecting him and others like him, therefore he had resigned and would now advocate the right of dual nationality holders to run for elections from outside parliament. It is not clear whether he would continue as adviser on interior, which Prime Minister Raja Pervez Ashraf wants.

The debate on the dual nationality issue within the Senate and in the media and public space indicates that opinions are sharply divided on the issue, both within the ruling PPP as well as its coalition, not to mention the opposition within and without parliament. The likelihood therefore, of being able to garner a two-thirds majority in favour in both houses must remain an open question at this stage. The SC and others’ reservations stemming from national security considerations may not be without weight. However, as already pointed out, this is a recent consideration that skips over the past practice of not raising the issue despite individuals holding foreign or dual nationality having served as prime ministers. The blind eye turned by successive election commissions to the anomaly has also raised eyebrows of late.

Had these election commissions done their job, the issue would have been resolved at the stage of filing papers by foreign or dual nationals (except when Moeen Qureshi was ‘flown in’ as a caretaker prime minister). The government’s consideration stems from the demand that expatriates have of late been voicing, including a conference hosted by Daily Times in the House of Lords recently, in which the case for electoral participation by dual nationals was presented. There is little doubt that the weight of financial contribution by expatriates to the country’s foreign exchange reserves qualifies in the government’s eyes, the right of this considerable community to have the doors of elected office opened to them. Identity and nationality have become less rigidly defined notions because of globalisation and the considerable movement of people across borders in search of better opportunities, without necessarily turning their back on the homeland. -Dailytimes