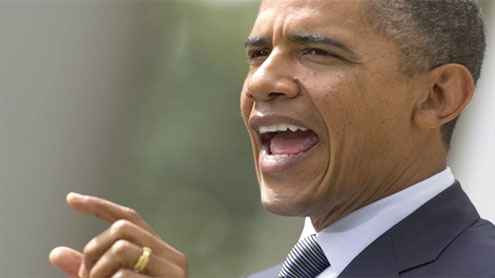 US President Barack Obama’s position favouring bilateral resolution of Kashmir is less a novelty and more a reminder that, with America’s 2014 departure from Afghanistan about to reset the region’s affairs, Islamabad and New Delhi must resolve lingering disputes on their own.

And while the White House seems tilting towards India’s long-held position — in terms of ruling out outside interference — it is in fact the way much of the world has come to comprehend the Indo-Pak relationship, that the solution of their problems must be bilateral. Understanding that the subcontinent is home to deep rooted and difficult problems at the best of times, nothing short of a historic compromise is needed for both sides to survive and thrive in a changing regional and international environment. Long years of confrontation, including wars, proxy conflicts and failed diplomacy have only served to increase mutual mistrust, alienation and damage.

Since both countries went overtly nuclear in 1998, the prospect of a conventional war has been virtually ruled out. There was therefore little left to choose from save continued diplomacy and gradual de-escalation leading to eventual normalisation. Regrettably, reactionary elements on both sides and adverse developments repeatedly derailed whatever progress was made to carve out a path different from the norm, prominent examples of which are the fizzling out of Vajpayee’s initiative in Lahore in 1999 and Musharraf’s in Agra in 2004.

Clearly, progressive elements on both sides have not brought the full weight of their opinion and influence to bear despite having realised some time ago that the confrontationist posture has been overtaken by time and tide, and new, relevant approaches are the need of the day. This sentiment has gained momentum since the war on terror began upsetting the regional balance. Pakistan took the lead in proposing a relationship based more on principles of 21st century realpolitik — mutual economic interest lays foundations for political exchange — when General Musharraf offered a four-point solution for Kashmir, beginning with demilitarization on either side of the Line of control (LoC).

Regrettably the offer failed to generate the requisite momentum. Of late though, with both sides moving to increase trade, the granting of MFN status to India, and revived proposals in the air regarding making the LoC porous, there are encouraging signs that better sense has begun prevailing in the right circles. The idea to bind bickering neighbours in a long-term, mutually beneficial economic and financial cooperation seems ideally suited for Pakistan and India. The Chinese-American model is perhaps the perfect example. Whenever the political climate deteriorates, lobbies spring into action in both capitals, stressing the need to protect and nurture the much more beneficial side to the relationship.

President Obama’s is just another in a long list of voices advocating just such an understanding in South Asia, though it is by far the most important one. Yet his pragmatism on this front is offset by what appears to be political misreading of another: India’s presence and role in Afghanistan. Granted, New Delhi has played its Afghan hand much more smartly than Pakistan, despite the latter’s strategic depth doctrine and high-level penetration.

But reading too seriously into India’s projection of soft power into Afghanistan risks ignoring some of Pakistan’s most serious concerns, which in turn threatens the unravelling of much of the painstaking progress in their bilateral relationship so far.The run up to the US/NATO withdrawal by 2014 is a crucial time for South Asia. Too much is at stake, some of which is on the way to being achieved, to be allowed to go waste. All important players have realised the centrality of a stable, secure and democratic Pakistan to the region’s strategic mix. It is time for all to build on it.