Faisal Abidi in the doghouse 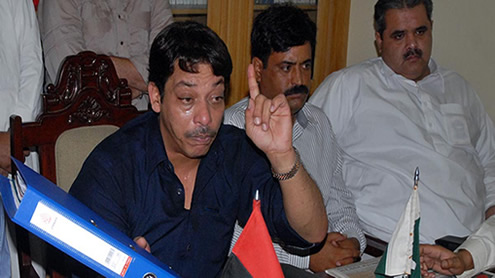 Caught between the devil and the deep blue sea, Senator Faisal Raza Abidi has been issued a show cause notice by the PPP for his tirade against the judiciary, and at the same time could be charged with contempt of court for his remarks in his August 5 press conference.

The firebrand senator has been talking vociferously for the last four years on TV talk shows defending, protecting and explaining the government’s position on different issues. He is believed to be close to President Asif Ali Zardari and has gone overboard in certain instances in attempting to clear the president’s position. Senator Abidi had said in his August 5 press conference that while contempt cases were pending against a number of people, including PPP leaders Sharjeel Memon, Taj Haider and Babar Awan, the Supreme Court only acted hurriedly against former prime minister Yousaf Raza Gilani and sent him home. Abidi has been given ten days to reply.

Meanwhile the Supreme Court has sought the footage and transcript of Senator Abidi’s press briefing and television interview last week to ascertain whether they attract contempt of court or not. Faisal Raza Abidi’s press conference in the PPP’s central secretariat was full of anger and marked disgust against the Supreme Court’s decision to strike down the Contempt of Court Act 2012. He distributed the financial statements of Arsalan Iftikhar’s company F & A Enterprise allegedly housed in the Chief Justice’s official residence in Islamabad. He went so far as to ask the Chief Justice to resign. Senator Abidi accused the judiciary of being hand in glove with military dictators and legitimising their unconstitutional rule.

With all that is going between the government and the judiciary on the NRO implementation case and the renewal of a tussle in the wake of the nullification of the Contempt of Court Act, such intemperate speeches might only make things worse. A petition has already been filed calling for the Supreme Court to charge Abidi with contempt of court. Issuing Senator Faisal Raza Abidi with a show cause notice suggests that the government wants to continue with its non-aggressive and restrained approach to the judiciary. Senator Abidi has reportedly fallen out with some important people in the party, which may explain his political gaffe that now has all the makings of a tipping point.

The government’s decision to play it cool under the tense circumstances in which the judiciary is relentlessly pursing the government to implement the NRO verdict is an indication that the government has opted to act slowly and wisely so as not to upset the apple cart of the democratic system per se. Only time will tell what was the right way to contest this turf war, whether Senator Faisal Raza Abidi was right to be so aggressive or the government with its going slow and restrained modus operandi was on the right track. Today, August 8, is another important day for the government before the Supreme Court when it resumes hearing the NRO implementation case asking the new prime minister, Raja Pervez Ashraf, whether he intends to obey the court’s directive to write that letter to the Swiss authorities. Whichever way the twists and turns in this case pan out, it is billed to add a new leaf to the political and judicial history of Pakistan, in which the fate of another prime minister hangs in the balance at the hands of an over-active Supreme Court.-Dailytimes