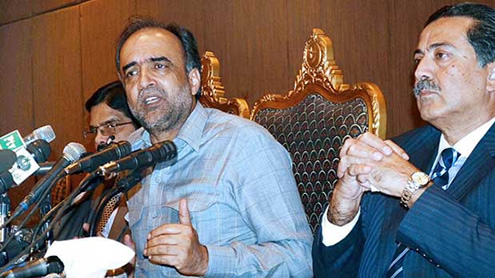 Federal Information Minister Qamar Zaman Kaira, while briefing the media after a cabinet meeting, revealed that a proposal that all public servants should declare their assets was under discussion.

The proposal dates from 2011 but has only now been taken up by the cabinet. It is argued that if politicians have to declare their assets, so should generals, judges of the superior judiciary and senior bureaucrats. So far, as part of the discourse on accountability in public life, this has been an idea mooted often, but relying as it does on just moral incentives for individuals holding high state office, has failed to elicit anything resembling an adequate response. This indicates that moral imperatives alone will not do, and that legislation will be required, which reportedly is under consideration in the cabinet.

However, before the proposal can be take up as part of the legislative process, the cabinet has asked the Establishment Division to submit a report to it on the issue. Only after that report is received will the cabinet, after perusing it and conducting due deliberations, decide whether to proceed on the (necessary) legislative path. The only concern is whether an excellent idea such as this one will see the light of day as a bill or even Act before the gathering clouds of the coming general elections are upon us.

There is no gainsaying the fact that tales of corruption have been part of our life and history. The finger of suspicion and/or accusation has been pointed at just about everyone, ranging from military dictators and their cohorts, powerful bureaucrats who know the rules and laws inside out and have proved adept at manipulating these to their advantage, and members of the superior judiciary who have stood accused in the past of misusing the perks and privileges allowed to them under the rules, especially when it comes to plots of land. This is not to miss out the even greater weight of accusation against politicians, only to point out that hardly any institution of power players/stakeholders has escaped the taint.

What this does in the case of politicians is that people’s hopes and expectations from them get transmogrified into disillusionment with democracy per se, although poor democracy may not be so much to blame for this perception as elected politicians themselves. Nevertheless, politicians have many layers of accountability hanging over their heads, not the least of which is the necessity of returning to the electorate again and again on their track record of performance in office. Not only this, politician are now required by law to declare their assets annually, failing which they are denied entry into the electoral race.

Arguments have regularly been produced by powerful institutions like the military and judiciary that they have their own internal systems of accountability. Since these are ‘in-house’ systems, they lack the advantage of transparency. The recent fracas between parliament’s Public Accounts Committee and the Registrar of the Supreme Court, in which the latter has refused to submit the accounts of the Supreme Court or appear before the Committee has caused much anguish to those who cherish the supremacy of parliament over all other institutions.

What a law requiring all public office holders to declare their assets would do would be to enhance the credibility of honest incumbents and expose the shady or grey areas of those not fully coming up to the highest and most desirable standards. Real accountability could then be possible and credible. Some elements viscerally opposed to the present government may want to paint this proposed law as motivated by a desire of upmanship in the current state of conflict between the government and the judiciary. Bu that would be too narrow and partisan a view. If the wider scope of asset declaration, encompassing powerful and hitherto immune to accountability let alone transparency institutions are brought into the net of the proposed measure, it can only be to the good of a clean, accountable, transparent state and society. It would set a precedent that may well begin to change the ‘slippery’ slope down which honesty and integrity have slid over the years.-Dailytimes