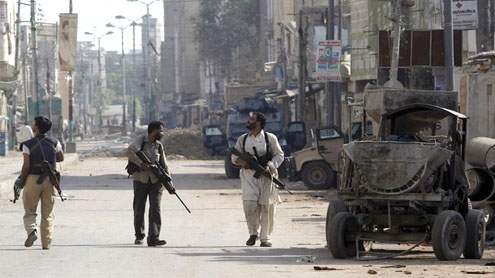 The fears that the approach of Muharram may trigger sectarian killings have come true with a vengeance in Karachi, and peripherally in Quetta so far.

In Karachi on Saturday, 20 people were killed, including six students of a Deobandi madrassa. These killings came after the authorities had imposed a ban on pillion riding, which does not seem to have deterred all kinds of gunmen on motorcycles from going about their deadly business. As though Saturday’s Karachi toll were not enough, Sunday saw a clash between two groups in Sohrab Goth, which soon reduced the area to a battlefield, with police and rangers attempting to restore calm at the time of writing these lines.

While the killings in Karachi can be traced to a range of reasons and perpetrators, including tit-for-tat sectarian killings, targeted political assassinations and plain criminal gangs fighting each other, the Hazara community in Quetta continues to be targeted with impunity almost every other day. In neither city can the efforts of the law enforcing agencies be seen to be having much effect. The troubles in Karachi are of course of longer standing, but Quetta has now joined the killing fields of Karachi as a slaughterhouse frequented by sectarian killers. The Saturday events ironically took place when the prime minister and key members of the federal cabinet were in the Sindh capital, an occasion where the expectation of enhanced security and control was viciously shredded by the fanatics.

Terrorism, sectarian conflict, crime and violence have become a way of life in the country, particularly in the big cities. The writ of the state is thereby exposed in all its weakness and ineffectuality. Arguably, these are the fruits of past (and continuing) flirtation with jihadi extremism for foreign policy goals, a venture that has not only affected Pakistan by the blowback from terrorist groups that have fallen out with the state and are challenging it to come to power and impose their narrow brand of religion, but also given space and deadly effectiveness to sectarian groups aligned with the Wahabi/Salafi school of thought.

Crime, and violent crime in particular, is owed to the precarious state of the economy, with unemployment and inflation soaring and weapons being easily and relatively cheaply available. If the pattern of sectarian murders in Karachi are any guide, the motorcycle riding killers have graduated from the spread of the Kalashnikov culture in our past because of our interference in Afghanistan to now the automatic pistol, or TT culture. This is the weapon of choice for these latter day assassins because it is easily concealable and deadly at close range. In contrast, the police and law enforcing agencies are fighting violent groups and crime with one hand tied behind their backs because the killers and criminals enjoy the political protection and patronage of the parties in power in the province.

Even if an accused is presented before the courts, the inadequacies of our prosecution regime, legal lacunae that fail to address the crisis emanating from terrorists and fanatics running loose, witnesses and judges’ intimidation, all combine to make the chances of conviction slim. The courts blame the police’s inefficient prosecution, the police blame the politicians, the latter blame each other, and so on, the bloody merry-go-round continues.

Hopes that better sense would eventually prevail and the coalition partners in the Sindh government would come together in their own interests to tackle these problems and arrive at a modus vivendi to return the city of lights to its former glory have all been belied. If the Supreme Court (controversially, it must be admitted) has declared that the provincial government in Balochistan has lost its right to rule since it is unable to protect the lives of citizens, some may be tempted to draw a parallel with the situation in Karachi in particular and Sindh in general, which is now witnessing the conflict spilling over to the interior and cities within it such as Hyderabad. It is not enough for the government/s to keep reminding us that elections are around the corner. In and of themselves, the elections will not change the situation a jot. Only the authorities, armed with the requisite political will, can make a difference. Having said that, optimism withers. – Dailytimes

Pak economy to expand two per cent in 2012: IMF