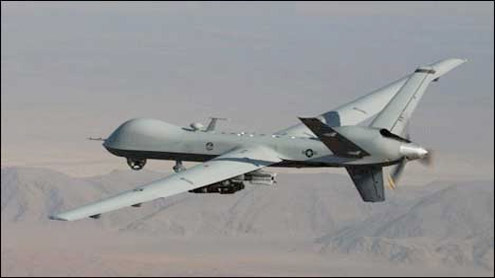 In his meeting with German Foreign Minister Dr Guldo Westerwelle in Islamabad, Prime Minister Nawaz Sharif has said that drones are simply unacceptable and should be stopped.

The Friday drone attack in a forested tribal area that straddles North and South Waziristan that killed seven people was the first attack since Nawaz Sharif took charge. An earlier attack had killed Waliur Rehman, second in command of the Pakistani Taliban, who was linked by US officials to a 2009 attack that killed seven Americans at a CIA base in Afghanistan. The killing of Waliur Rehman came on the heels of the Taliban’s proposal to broker some peace deal with the new government. The drone strike however led the Taliban to immediately draw back from negotiations.

This dialogue was considered important by the government and some political parties to defuse terrorism. With Pakistan increasingly reeling from terrorist attacks, drones are believed to have hardened the militants in their attitudes. Drone attacks have been seen as an infringement of Pakistan’s sovereignty. The tribal areas of the country drenched in militancy have left little choice for the US other than to go after the militants in forbidding terrain through drones. These militants arguably are exporting terrorism internationally.

Being the US’s preferred weapon for targeting militants in Pakistan, drones have become a policy issue that the new government is required to tackle. The gist of Prime Minister Nawaz Sharief’s maiden speech shortly before he took the oath of office, centered on sovereignty that no one should be allowed to violate. Soft as he was on demanding the US understand the implications drones are having in the context of Pakistan’s sovereignty, getting drones stopped completely could only be wishful thinking.

In his latest speech that delineated the new policy guidelines for the unmanned vehicle, Obama had made it clear that drone attacks would continue against targets that pose a continuing, imminent threat to the US. Giving assurance of precision targeting to avoid civilian causalities, Obama also indicated that different rules would continue to apply in the area that the United States considers the Afghanistan war theatre, which includes Pakistan’s border region.

The issue of drones will remain complex and intricate unless the Pakistan government and more so its military establishment redefine their role in the Afghan war. The jihadis who were driven out of South Waziristan in the military operation in 2009, found a safer haven in North Waziristan (NW), which eventually became a no-go area even for the military. As this piece is being written, an indefinite curfew has been enforced in NW in the follow up to the skirmishes between the militants and Pakistan army last Saturday. Since the establishment of new terror nests in NW, the Afghan war has intensified, whereby more officials of NATO forces have been killed by the Afghan Taliban with the assistance of the Taliban based in FATA.

One cannot expect the US to sit with hands folded while the jihadis wreak havoc in Afghanistan. They will be droned unless the military establishment in Pakistan stops using the Jihadis as their proxies to consolidate Pakistan’s position in post-2014 Afghanistan and to weaken Indian influence there. Having relinquished the strategic depth theory, Pakistan should also let Afghanistan build its state without any interference. India’s soft power strategy should not be taken as a threat. Being its neighbour, Afghanistan is free to develop friendly relations with India. How that makes Pakistan vulnerable is quite a puzzling equation.

The US Secretary of State John Kerry is due in Pakistan soon. Taking advantage of the visit, the new government should discuss options available to it on drones, to tackle the strikes. Even before we expect the US to stop droning our tribal areas, our military establishment should distance itself from the terrorists’ networks. They are as much our enemies as the US’s. – DailyTimes