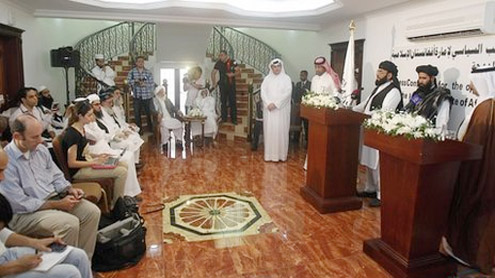 After 18 months of a stalled peace process, the Taliban have agreed to talk to pave the way for ending the war in Afghanistan.

The Taliban office in Doha would hopefully take forward the process that would include talking not just to the US but to the entire international community, said the announcement made by the Taliban group that inaugurated the office on Wednesday. The Taliban office, officially named as the Islamic Emirate of Afghanistan with the Afghani flag hoisted on it, will be the centre of attraction in coming days for negotiations about the future of Afghanistan. Perhaps it was this impending thought that had made Afghan President Karzai disgruntled and he announced halting the fourth round of talks on the Bilateral Security Agreement with the US.

The office according to him gives a symbolic display of alternative government. He was also dismayed by the overture of the US that had removed all the pre-conditions laid down earlier on the peace process between the Taliban and the US. Though the demand for the Taliban distancing themselves from al Qaeda and renouncing violence are part of the negotiating points, they would be talked through as the process unfolds. Talking heed of the complaints and perhaps to protect the renewed peace talks from crumbling, the US government has begun negotiations with the Qatari government and the Taliban over renaming the office and dismounting the flag.

The talks, say US officials, strike directly at two of the most critical parts of the Obama administration’s long term vision of Afghanistan: entering peace talks with the Taliban to help curb the insurgency as western troops withdraw and reaching an agreement to allow a lasting US military force post-2014. The announcement of the talks with the Taliban had come on the heels of giving the entire control of security in all of Afghanistan to the Afghan forces earlier this week. Both the US and the Taliban hail the dialogue as the important first step that would provide an opportunity to find a political solution to bring peace and stability to Afghanistan.

Though Afghanistan has been at a greater loss as far as the war on terrorism is concerned, the US too paid a heavy price in term of lives and the precious money that has depleted the national exchequer of the US government back home. Like every war, a settlement through negotiation is considered the only viable option to leave behind a safer Afghanistan for regional stability. One of the many fears that the Pakistan government has been suffering from was the post-2014 period, when the US would leave Afghanistan.

The void that might ensue reminded them of the post-Soviet occupation Afghanistan when the US had left the region in a hurry without looking back, until there was a government that had no appetite for women’s freedom or religious tolerance, a country that exported terrorism with the help of different extremist groups finding a secure haven to carry out their plans under the grand supervision of al Qaeda.

It is in this spirit that the Pakistan government has welcomed the peace process, notwithstanding the reservations Hamid Karzai has over Pakistan’s spy agency the ISI for its role in the making and breaking of Afghanistan. Not entirely unfounded, the ISI, now that Pakistan is knee-deep in terrorism and under siege from a Taliban insurgency and terrorism, would rather move sensibly instead of pushing itself into Afghanistan’s affairs and disturbing the peace process. A civil war in Afghanistan would have deep repercussions for Pakistan. A part of that is on display. On a greater scale this country would actually become a failed state. Therefore, a peaceful Afghanistan is in everybody’s favour, the US, Pakistan, the region and the world. – DailyTimes