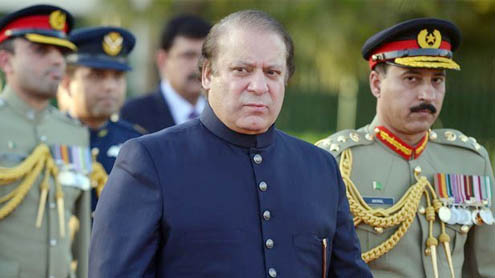 Prime Minister (PM) Nawaz Sharif has embarked upon a series of consultations with state institutions that are ‘stakeholders’ in the formulation of the new security policy that the government has placed on top of its priority list where it belongs.

The first consultation consisted of a visit to the ISI headquarters on Thursday where the PM and his senior colleagues were given a five hour briefing on all aspects of the security challenges facing the country. On Friday the PM was expected to hold a meeting with the interior ministry officials to obtain their input. Next on the schedule is a consultation at GHQ. While these consultations are afoot, the all parties conference originally mooted for Friday has been postponed. Reportedly, while ISI DG Lt-General Zaheerul Islam led the briefing with inputs from senior ISI officers in charge of various aspects of security policy, the PM told the ISI DG that the security establishment’s ‘apprehensions’ would be taken care of.

Apparently the reference to ‘apprehensions’ reflects the ‘complaint’ of the security establishment during the briefing that the political leaderships in Khyber Pakhtunkhwa and Balochistan were opposed to the military’s actions and were seriously hampering the counter-terrorism and counter-insurgency efforts of the military. Nawaz Sharif characterised the ISI as a major stakeholder in the fight against terrorism. He advised the premier intelligence agency to develop effective mechanisms to pre-empt terrorist activities and for all national security agencies to boost mutual coordination and cooperation to prevent terrorist attacks.

He announced that the interior ministry would be the coordinating body among the intelligence agencies. In the light of his recent visit to China, the host country’s concerns over the safety of its nationals in Pakistan and the critical importance of securing them if China’s help in the economic sphere is to be translated into reality, the PM emphasised that Nanga Parbat-type incidents, in which Chinese nationals along with other foreigners were killed, must be prevented at all costs and all Chinese personnel in Pakistan must be given foolproof security.

Some reports in the media place the visit by the PM to the ISI headquarters as well as his intent to consult GHQ in the context of alleged differences between the government and the military over the Ziarat Residency attack and the leak of the Abbottabad Commission report that put the military and the intelligence agencies in a poor light. It is being reported that Federal Interior Minister Chaudhry Nisar Ali and Punjab Chief Minister Shahbaz Sharif have embarked on a fence mending effort, in which the first step has been a meeting of the two with the Rawalpindi Corps Commander.

Be that as it may, the fact remains that mutual distrust and suspicion between the civilian and military security establishments is of long standing and continuing. Even the leaked Abbottabad Commission report speaks of such differences. Without overcoming this gulf, the struggle against terrorism is like fighting with one hand tied behind one’s back. Similarly, the level of coordination amongst federal and provincial security establishments, especially now that parties other than the PML-N lead the provincial governments in three provinces (although the PML-N is in the Balochistan coalition as a major partner), needs critical improvement if the gaps in the security architecture of the country are to be plugged.

It is good that the PM is taking the initiative to hear carefully and try to bring about a meeting of minds with the military first and foremost, and then with the civilian security institutions in order to bring everyone on the same page as far as the national security policy is concerned. The task is far from easy, not the least because the organisational mechanisms for meaningful coordination are conspicuous by their absence. Whether the interior ministry in its role as coordinator will be able to bridge the multifarious divides that bedevil the anti-terrorism effort remains to be seen. It seems that the National Counter Terrorism Authority (NACTA) that finally saw the light of day towards the end of the previous government’s tenure is still in limbo and its role and powers remain undefined so far.

The government must be wary after the PM’s visit to Balochistan before he went to China that the perceptions and policies being pursued by the military in Balochistan do not necessarily represent the best way forward in the troubled province. The insurgency in Balochistan is of a different nature from the jihadi terrorism that afflicts the rest of the country. There, a political solution seems the wisest course, while a nuanced combination of force and leaving the door open to any terrorist willing to come in from the cold best answers the needs of the anti-terrorist struggle. – DailyTimes

Pakistan’s first hydropower IPP to be inaugurated on Monday

Pakistan’s first hydropower IPP to be inaugurated on Monday