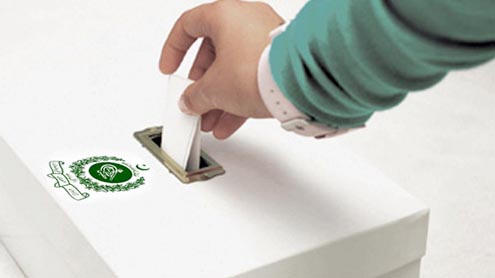 The controversial presidential election being held today has the potential to sour the political atmosphere for years to come.

An uncalled for intervention by the Supreme Court (SC) and the weak-kneed abdication of its independence by the Election Commission of Pakistan has blighted the respect of both of these institutions. Pakistan People’s Party (PPP), the major opposition party in the National Assembly and Senate, has boycotted the presidential election. Other parties such as the Pakistan Muslim League-Q and the Balochistan National Party-Awami have also joined the boycott to protest against what is being called a one-sided decision of the SC in favour of the ruling PML-N.

These developments have adversely affected the political landscape of the country and may lead to a polarization that would prove deleterious to the working of democracy over the next five years. The Muttahida Qaumi Movement (MQM) and PML-N’s embrace, the resentment against it amongst the Sindhi nationalists and the Pakistan Muslim League-Functional (PML-F) with whom PML-N had only lately forged alliances, and Imran Khan’s anticipation that the presidential crisis could lead to a grand opposition alliance in the future, are developments with serious political repercussions.

True to its track record in recent years, the MQM, as the Chief Minister of Sindh, Syed Qaim Ali Shah also said, has once again embarked on fulfilling its constant desire to be part of the government. Senator Raza Rabbani, who was the PPP’s presidential candidate, has dismissed the speculations that his party may support the PTI’s candidate, saying outrightly that they do not intend to attend any session on July 30, so supporting any candidate is out of the question. The Senate, National and provincial Assemblies will be the venues for the presidential election today, where the electoral college for the president’s election will vote.

A strategy for the presidential polls has been discussed between Chief Minister Punjab Shahbaz Sharif and Prime Minister Nawaz Sharif. Similarly a meeting of the parliamentary party of the PPP has been arranged for today, but nothing is yet known about its agenda. One could speculate that it would reiterate its stance to boycott the presidential election and devise the party’s future strategy. Alhough Imran Khan was inclined to boycott the election because of the SC’s controversial order to hold the election on July 30 without hearing the other stakeholders, his party leadership and their presidential candidate, Justice (r) Wajihuddin Ahmed, prevailed in favour of participation.

In this backdrop, the presidential elections will leave nothing but a bad taste in the mouth. Are we goiing to see a replay of the days when presidential addresses were drowned out by the opposition’s disrupting voices? The newly elected head of state might be hard put to it to prove that he will be a neutral and all weather President. That we would unravel our democratic dispensation at this stage on an issue as meaningless as the election date falling in the last leg of Ramazan was not expected by any sane mind. – DailyTimes