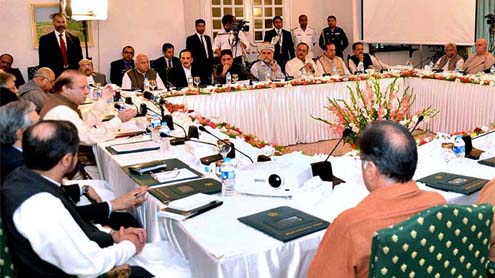 The much awaited All Parties Conference (APC) concluded in Islamabad on Monday with a joint resolution emphasizing the sovereignty and territorial integrity of Pakistan and expressing complete trust and confidence in the armed forces.

After detailed briefings by the COAS General Ashfaq Pervez Kayani and DG ISI Lt General Zaheerul Islam, the APC, attended by all party heads including the ‘reluctant debutante’ Imran Khan, reminded the people of the recommendations of the previous six APCs and joint sittings of parliament from 2008 to 2013 that had not been implemented. The APC made reference to the ‘give peace a chance’ philosophy underlying these recommendations. It expressed sorrow and regret for the thousands of civilian lives and military personnel lost in the struggle against terrorism over the years, declared the drone attacks illegal and immoral, and underlined the blowback from the actions of NATO/ISAF in Afghanistan on Pakistan’s security.

The APC underlined the colossal damage to social and physical infrastructure, financial losses and the adverse effects on the economy of the ongoing strife. It emphasized the need to compensate and rehabilitate the victims of terrorism. It also recommended that Pakistan consider taking its case against drone attacks to the UN Security Council. The APC appreciated and supported the collaborative efforts of the federal and Sindh governments in conducting a targeted operation against violent criminal elements in Karachi. Peace within and without lay at the root of the joint resolution’s advocating dialogue to bring the alienated Baloch back into the mainstream and supporting peace efforts in Afghanistan.

The federal government was given a mandate to do whatever it considered necessary to achieve these goals of peace, without which no progress was possible. Earlier, in his opening remarks at the start of the APC, Prime Minister Nawaz Sharif, chairing the moot, appealed for eschewing politicking on certain issues of national importance such as terrorism and the energy crisis and stressed the need for unity in the face of these adversities. He appreciated the fact that both major stakeholders, the PPP and the MQM, were on board vis-à-vis the Karachi operation.

The positives that can be counted from the holding of the APC, despite a healthy dose of scepticism on the part of most analysts regarding what may or may not be achieved from what some considered a futile exercise, are that all the political forces and the armed forces were in agreement on the way forward. General Kayani underlined this in a statement on the day. The thrust of the APC’s conclusions boils down to giving dialogue and negotiations with the terrorists a chance.

Imran Khan, whose desire for a separate briefing before the APC was conceded by a meeting just before the APC with the prime minister, COAS, DG ISI and interior minister, argued that the government should not employ talks and force simultaneously, but allow the dialogue option a fair run before taking a different tack. That desire is reflected in the APC’s joint resolution’s emphasis on dialogue as the first option, although media reports go further than the wording of the resolution and say force remains the fallback option if talks fail. The APC was originally scheduled by the government for July 12 but could not be held for, among other reasons, the fact that the government’s preparations were not yet complete.

It has been argued in certain quarters that amidst all the other blunders by Musharraf, sending the army into the tribal areas for the first time in Pakistan’s history in 2004, ostensibly under US pressure, was a grave error that is mainly responsible for the chaos that has overtaken the country since. What this narrative ignores is the complete picture of the trajectory of events since 9/11. Musharraf practiced a dual policy vis-à-vis his ostensible US and western allies in the war on terror by acting against al Qaeda and protecting, nurturing and providing safe havens to the Afghan Taliban to fight on in Afghanistan. This enmeshed Pakistan not only in Washington and other western capitals pressing for Islamabad to ‘do more’ vis-à-vis the terrorist safe havens, it arguably led to unbearable pressure that culminated in the ill-thought-through adventure of sending troops into the tribal areas.

Since then, rounds of fighting have been punctuated by peace talks, agreements derived from these having a sorry history of violations by both sides and the terrorists using peace interludes to strengthen themselves. The icing on the cake was provided by the Lal Masjid fiasco, after which the TTP was formed and declared war on the state. While the APC’s positives are not to be sneezed at, the proof of the pudding lies in the eating. The consensus achieved in Islamabad is heartening and welcome, but the follow up is even more critical.