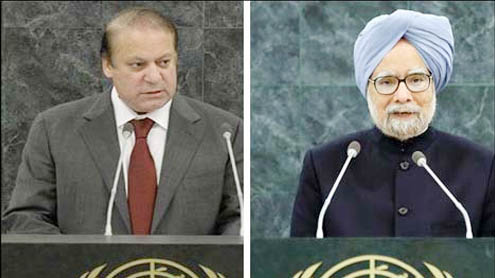 Eventually the meeting between the prime ministers of Pakistan and India took place in a cordial atmosphere in New York on the sidelines of the United Nations General Assembly’s (UNGA) annual session.

That both the countries have decided to continue the process of dialogue and peace negotiations is encouraging. The intent to move forward provides a befitting response to all the negative forces that had been designing ill-will around the relationship ever since Prime Minister (PM) Nawaz Sharif announced his intent to mend fences with India. The meeting that lasted for one hour was focused on issues that needed immediate response, such as the skirmishes on the Line of Control (LoC). Both the countries have decided to activate their Director General Military Operations (DGMO) to reinstall the mechanism that had previously maintained peace on the LoC so that the ceasefire is re-established. On the Mumbai attacks, the issue that keeps pushing the relations between both countries to the edge, PM Nawaz has assured complete cooperation.

However, on the issue of India’s involvement in Balochistan’s insurgency, PM Manmohan Singh called it Pakistan’s internal matter, in which India would not interfere. Other matters related to trade, Siachen, Sir Creek, etc, also came under discussion during the meeting.It is unfortunate that whenever Pakistan and India decide to sit down to solve their differences, the spoilers do things that compel the process of dialogue to be severed. It happened when Nawaz Sharif in his earlier tenure as the PM invited Atal Bihari Vajpayee, the then Prime Minister of India to Pakistan, and subsequently the Kargil fiasco erupted. It had happened during the previous government’s term too, when it was finally decided to give the Most Favoured Nation status to India to improve trade between both the countries that suddenly killing and shooting across the LoC reared its ugly head. Once again as Nawaz Sharif moved to start talking to.

India, the same elements have started throwing spanners in the works. Even before the UNGA session had begun, media in both countries was hurling negative comments, raking up the past to minimize the chances of both prime ministers meeting. Avoiding the spoilers’ trap and getting along has shown that the maturity needed to lead both the countries to finally resume the composite dialogue, stalled since long now, has been attained.Though it is a reality that Pakistan’s army had been calling the shots on Pakistan-India relations in the past, Indian External Minister Salman Khurshid’s comment criticising the Pakistan army and ISI may be read as a premature statement rooted more in past perceptions than a hopeful future.

It is unlikely that such high-level meetings could occur without the armed forces, the intelligence agencies, and the government of Pakistan being on the same page. Pakistan’s India-centric approach had of late been dismantled as the internal threat mounted pressure on its law enforcement and security forces to first put its own house in order. In his address on Independence Day on August 14, the army chief General Ashfaq Parvez Kayani had categorically talked about a shift in the Pakistan army’s threat perception, which now rises not from India but from homegrown terrorism.

It is about time that India lends credence to this shift and gives it a chance to develop into a permanent strategy on relations between both the countries. The restraint shown by the Indian National Security Adviser Shivshankar Menon during the press conference he held after the meeting has given hope that this initiative of both the countries would not go waste and that the new government in India after the 2014 elections would remain commited to promoting normalisation and peace, frustrating the designs of those who keep pulling the strings to perpetuate conflict. – DailyTimes

Petroleum prices likely to swell by Rs 5.77 per litre

IGP for beefing up security in province

IGP for beefing up security in province