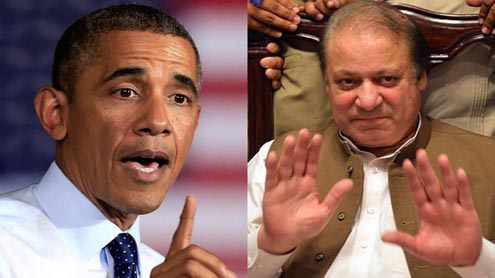 Prime Minister (PM) Nawaz Sharif is on a state visit to the US. The relationship between the US and Pakistan had spiralled downwards since the US raid that killed Osama bin Laden in 2011.

The emergence of this long sought skeleton in our cupboard derailed relations and suddenly everything, the aid programme, the strategic dialogue and other schemes of mutual interest halted. The Salala incident, when the NATO forces, arguably in a retaliatory friendly fire, killed some 26 Pakistani soldiers while asleep, proved the last nail. That was the end to what was called a relationship defined by a military ruler, Musharraf, who had unilaterally surrendered to US bullying and therefore new rules of engagement were considered critical if further damage to the relationship was to be prevented. The ground lines of communication, through which much of the supplies for the US-led NATO forces pass, were closed, unless an apology over Salala was given by the US.

This development not only burdened the US financially, as the alternative Northern Route was long and expensive, it also awakened the US to the reality about Pakistan’s leverage over the supply lines for the western forces in Afghanistan. Though PM Nawaz Sharif has on the top of his agenda the immediate cessation of drone attacks in Pakistan, to the US it is the withdrawal of its forces from Afghanistan in 2014 that tops the list of discussions the two countries will undertake during this visit. The Kerry-Nawaz meeting did discuss other things of bilateral interest such as energy, the economy and trade. However, security, terrorism and Afghanistan remain the overarching issues. The US has also shown interest in restarting the stalled strategic dialogue to expand and deepen the long-term relationship post-withdrawal. Mitigating Pakistan’s fear of being left high and dry once the US leaves Afghanistan in 2014, an assurance has been given of an engagement with Pakistan for the sake of regional stability.

Pakistan too has promised to extend complete cooperation in assisting the US for a peaceful withdrawal from Afghanistan. To seal the expression of goodwill, the US has announced releasing more than $ 1.6 billion in military and economic aid. Similarly the State Department has asked the US Congress to release more than $ 300 million in blocked security assistance to Pakistan. The State Bank of Pakistan has confirmed receiving $ 322 million under the Coalition Support Funds. The $ 1.6 billion in military and economic aid will not start flowing until 2014, when the real test of Pakistan’s assistance to the US arrives. It is not only the US withdrawal that makes 2014 important, the elections in Afghanistan are as significant to keep the legacy of the US presence intact in the country that the US has tried painstakingly to raise from the ashes after 2001, when every institution there was in shambles. Negotiations with the Taliban for a return to peace in the country are also a pertinent issue that needs settlement during 2014.

Therefore, the PM will return with his plate full of things that unless implemented efficaciously would not guarantee a stable Pakistan-US relationship post-2014. Pakistan’s eagerness to see drones stopped actually depends entirely on its ability to take on the sanctuaries that it has provided to the terrorists in the tribal region. Since we did not help the US, as was the agreement, to eliminate terrorism, in fact enabled the terrorists to strike against the US forces inside Afghanistan by providing them safe havens in Pakistan, the US in its national interest decided to do the job itself. Drones, being their strategic warfare asset, came handy and will be used until we realize the gravity of the situation and take the right course. What shape Pakistan-US relations take is yet to be seen; only time will tell if the US will live by its words or as the speculation goes, will downgrade Pakistan for a far more significant posture in the Asia-Pacific. * -Dailytimes