Cracking Down On Hate 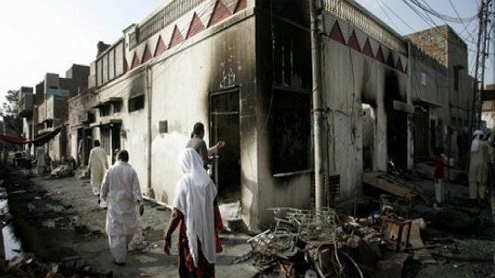 The dangerous thing about sectarian violence is that it is a contagion that must inherently spread in a multi-denominational society with the state’s preventive and law enforcement capacity questionable.

After the bloody clashes that unfolded in Rawalpindi on Friday, the 10th of Moharram, hatred and strife have spread more and more and there seems to be no sign of it abating any time soon. The clashes in Rawalpindi saw as many as ten murdered followed by a curfew being imposed. The tensions spread to Multan, Chishtian, Kohat and Hangu in a matter of days and now, on Tuesday, a Shia professor was gunned down ruthlessly in Gujrat by unidentified assailants in what can only be described as a hate crime of the most despicable kind.

The professor was the victim of a target killing; his only crime was that he was a Shea and his gunning down was in retaliation for the Rawalpindi incident in which Shea mourners beat up and killed Sunni seminary students after being provoked by a hate-sermon from a mosque. One shudders to think what to expect next. That is why it is of the utmost importance now that the government stop taking half-baked measures and actually do something about what could be a potentially explosive situation, ready to engulf the country as a whole. The government has proposed monitoring all forms of hate speech on social media networking websites in a bid to tackle this menace.

It has issued directives to the Ministry of Information Technology and the Federal Investigation Agency (FIA) to monitor all controversial statements made online on these popular sites as well as in text messages. While this is a noteworthy step because monitoring statements intended to provoke will help lead to the perpetrators of such sentiments, there are reservations because of the manner in which governments have tackled such problems in the past. The inclination of our governments for some years has been to ban or suspend anything on the modern means of communication that may cause it the slightest unease, e.g. YouTube and cellular services. It must not fall prey to this device when it comes to social media because apart from being a retrograde step, it will also deprive the authorities of the source of online hate speech and incitement.

Monitoring is a step in the right direction but it should stay at that. The government must not limit itself to the confines of online instigation; it must also tackle the pulpit. Hate speeches are delivered across the land in various mosques and seminaries, especially on Fridays, calling on the ‘faithful’ to take up arms against minority communities like the Shins and Ahmed is. This has to be stopped. The blatant use of the loudspeaker in mosques to reach audiences far and wide with this vitriol must be halted. Hate literature that is distributed in every nook and cranny must be banned and taken away out of the public space. These are steps that must be taken immediately.

After the trouble in Rawalpindi, we are witnessing a spate of attacks and protests, which may seem like small, insignificant incidents in themselves but one must remember that they have the potential to grow all over the country on a very wide scale. The government cannot allow this to happen and must intervene at all costs. It must call together the ulema (clerics) from both sects and ask them to talk some sense into their followers, calming them down in this emotionally flammable time. It is also time for the authorities to take a tough line on all those who seek to deepen the sectarian divide through violence. If this plague is not nipped in the bud, the country could have a lot to lose. -Dailytimes