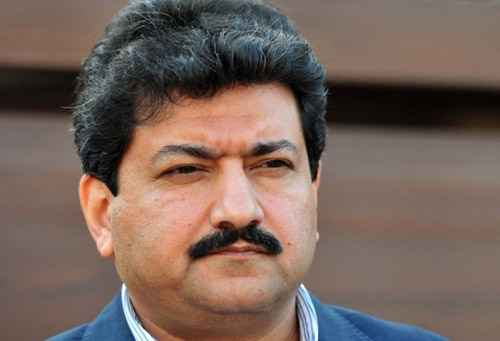 Inter-Services Public Relations (ISPR) Director General (DG) Major General Asim Bajwa came out all guns blazing on Sunday against what he called the regrettable and baseless allegations against the Inter-Services Intelligence (ISI) and its DG Lieutenant-General Zaheerul Islam of being responsible for the murderous attack on prominent journalist Hamid Mir in Karachi on Saturday, in which fortunately, despite the best efforts of his attackers, he came out wounded but alive.

General Bajwa said legal and constitutional action was being deliberated upon against this “shameful allegation” that resulted in the global gross insult and degrading of an army institution. He ascribed the attack to ‘miscreants’. He thanked the people and (sections of the) media for strongly condemning what he called this “shameful propaganda aimed at an unsuccessful attempt to malign the ISI” and standing by the army and its institutions, which were cognizant of all affairs and in the forefront for strengthening democracy and freedom of speech. However, he criticised the fact that the allegations against the ISI and its chief, without any proof, were broadcast with the DG ISI’s picture for a continuous eight hours on the group’s television channel.

He welcomed the announcement by the government that a three-member judicial commission would be formed to investigate the matter and report within 21 days of it being nominated by the Chief Justice of Pakistan. It may be recalled that the government has also announced a reward of Rs 10 million to anyone providing credible information that could lead to the arrest of the accused. Meanwhile journalists’ bodies continued their countrywide protests against the attack.While Hamid Mir recuperates in hospital and awaits possible further surgeries, in all of which we pray and hope that he will come through hale and hearty, the treatment of the news of the attack by the group that employs him has given rise to a new controversy, to which General Bajwa referred.

It is understandable that in the shock and heat of the moment after the news broke, his brother, Amir Mir, also a journalist, and the group’s TV channel continued to point accusing fingers at the ISI and its chief into the night. Ordinarily, given the state of our electronic media these days, this could have been ascribed to excitement and a lack of judicious editorial control, but for the accusations and allegations to have been repeated ad nauseam gives pause for thought. The question arises, who is in charge of the store when such things are happening? Only belatedly does it seem better sense prevailed and the group has published and broadcast a statement distancing itself from the accusations against the ISI, reiterating its respect for the army and its institutions in an attempt to undo the damage or at least control it.

Damage control became necessary, even more so after Amir Mir’s claim that the New York-based Committee to Protect Journalists (CPJ) had been sent a video earlier by Hamid Mir laying out his allegation of ISI’s responsibility if anything happened to him was refuted by the CPJ. The US State Department has condemned the attack too, reiterating the critical need for freedom of expression in a democracy.While all thoughts return again and again to recuperating Hamid Mir, we must reflect on some of the lessons of this episode vis-à-vis responsible media. Since private TV channels arrived in 2002, ethical and responsible journalism has taken a back seat on most if not all these channels in the race to break the news first and thereby garner ‘ratings’ (a false and misleading criterion on examination, given their narrow and skewed base sample).

A hysterical and sensationalist air permeates most if not all private TV channels without the realisation just how powerful the medium is and how devastating can be its impact if news is not presented soberly and responsibly. When one of its own was attacked, and that too a prominent figure, Hamid Mir’s group failed to rise to the occasion and standards required in such a situation. Post facto retreats are never quite as effective as responsible journalism in the first instance. Nevertheless, as fellow journalists, we hope the army will take a lenient view of the lapse, ascribe it to getting carried away in the heat of the moment, and move on, as General Bajwa indicated, to full cooperation with the judicial commission and its investigation. This time round, the commission will have the eyes of the whole world on it and hopefully will therefore produce a meaningful outcome, not the damp squib the commission on Saleem Shahzad turned out to be.