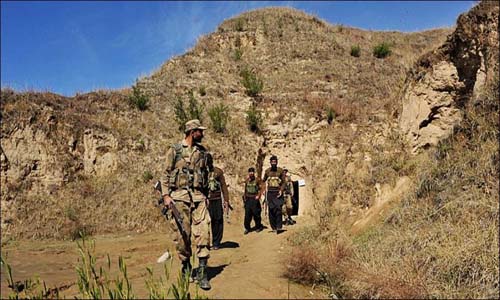 The tribal belt of Pakistan never escaped from the implication regional games. The regional turmoils have shad its impact on the image of tribal people and their faces have been painted accordingly. The history of face-painting dates back thousands of years, and has been used for all manner of purposes: camouflage for hunting, war paint for intimidating the enemy, magical designs for use in religious ceremonies, and, of course, beautification.

These paintings are made by individual own consent or some time individuals or groups faces are painting by other to convey the hidden meaning to the rest. The face of Federally Administered Tribal Areas (FATA) have been painting by foreigners and indigenous scholars, politician and media personnel with different colours. They spelled it the land of heroes to the most disguised picture portrayed today. Tribal’s faces are painting with different colour and description. In 1948 the tribal people took part in Kashmir war and part of Kashmir was liberated. Since 1948 till Afghan war their faces were painted as courageous, brave, loyal nationalists and asset of Pakistan defence. With Russian’s invasion in Afghanistan a sudden change occurred to the world politics.

Pakistan sided with the capitalist world, and stood against the communist Russia. The invasion in Afghanistan was considered a threat to Pakistan security by the than martial law administrator Zai ul Haq. The USA started pouring weapons and money into Pakistan to fight back Russia from Afghanistan. Pakistan and US intelligent agencies, ISI and CIA started a venture of recruiting Mujahideen from Pakistan and training camps were established in the tribal belt, FATA. Islam was used as a tool to achieve the established goal of defeating Russian forces in Afghanistan and to help out Afghan forces against czarist. A propaganda campaign was started against red armies in which Islam was used to serve the Pak-US strategic objectives.

Pakistanis were misled and were sent to Afghanistan in the name of holly war. More than a decade the recruitment of tribesmen and Pakistani continue to be fuel of great game between two super powers. However, CIA got its objective, defeating czarist forces resultings in the disintegration of Russia. The mujahideen support had vanished and with support of Pakistani intelligentsia Taliban rise on the horizon in Afghanistan to capture the power. they got success within a short time and Kabul fell in the hands of Taliban. Pakistan recognized TALIBAN government in Kabul. Again the faces of tribal peoples are painted new brush having green colour of lovers of Islam. In the national and international media tribesmen were hailed a heroes of Islam and Afghan war. These painters soon changed the colours and again with Americana invasion in Afghanistan the brushes got changed. The wind started blowing in opposite direction.

Their services and sacrifices not only went waste and rotten but a dark colour was chosen to paint them. Now lets see in the given line what happened. Pakistan became a non-NATO ally of US in the so called war on terror and their own created mujahideen and Taliban becomes terrorist. With the toppling of Taliban government, Taliban were in search of shelters and safe heavens from where they could create trouble for American led afghan government. The pakistani Mujahideen, recruited in 1980s slipped into the tribal region along with some companions. The Pakistan army under some internal and external compulsion entered into FATA to kill the Taliban and dismantle their network.  Again political and security analysts started painting the post 9/11 scenario. One political analyst draw a terrible picture of FATA and write on it “wild west”.

Our security agency brushed it with black and called tribal region an ‘intelligent black hole’. While others do not waste time writing the face of FATA, a Terrorist Hub, NO Go Area, Bad Land, Al-Queda and Taliban Sanctuary, Most Dangerous Place, and so many names it has today on its desolate face. The people of fata, qabaili or tribesmen collective and individual faces painting is continues. Brutal, terrorist, Taliban, militant, inhumane, traitors, etc are painted on individuals and collective faces of the people. Within the country and abroad these notorious painting created issues for tribesmen and everyone looks at them with disguise and hatred.

The painter might have fun or some economic or political interest but for the tribal people it has bitter repercussion. The political and security analyst, journalist or anchors, political leaders and army establishment have left no stone unturned to prove them against the state. Every bomb blast, firing or killing in the country has been linked to the region of unprivileged people, FATA. Even some scholars do not hesitate to malign their culture and blindly targeting them. A religious scholars Javed Ahmad Ghamidi called tribal culture the most vulgar, brutal in the world. He termed decapitation a tribal practice where 6 years old children can decapitate men without fear and hesitation.

They still proud on such shameful presentation of FATA and are looking for honours and titles. This is very unfortunates that tribesmen faces are always painted by other which are too much different from the real picture. The non tribal presentation can not be free from biasness and bias presented picture confuse the world so much that they even do not believe in the real faces of the tribesmen. All the dominant and real qualities of tribal society and culture of hospitality, sincereness, friendliness, love, respect and peace are buried under the projected face of brutality, terror and wilderness. No doubt the dominants forces turn history in their own favours and present it what best suit for them. The same happened to FATA and the heroes of the past are today’s traitors and terrorists.

Amazon Smartphone Fails to Kindle a ‘Fire’ Among Reviewers

Top 10 Most Beautiful Mosques in the World

Top 10 Most Beautiful Mosques in the World