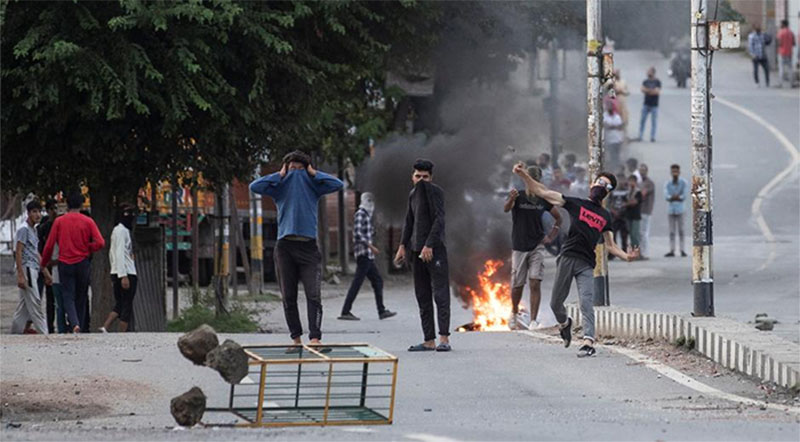 Since abrogation of article 370 & 35-A, The Kashmir and Kashmiris are in critical situation, their lives are at risk, completely blackout of communication in the region and strict curfew has been imposed. Extra heavy troops were sent and N Modi described it “beginning of new era” actually it is the hindutvacracy، alarming is that the troops sent are mostly RSS, Bajrang dal, and other hindutva organization activists. Besides these thousands more were arrived earlier as amarnath pilgrimagers. it is actually a plan of kashmiri holocaust according to hindutva xenophobic ideology of Dominance.

There has been no existence of hinduism before 1871 census arranged by British colonial power, British first ever introduced Hindu as a religious designation, afterward they began to think themselves as hindu. In twentieth century hindu nationalist known as Sangh Parivar proclaims an ideology of “hindutva” aimed at the dominance of hinduism in india which it promotes of violation and terror. Its main objective and agenda based on subjugation and driving out Muslims and christians. For achieving racial dominance and hindutva chauvinism, they adopt German Nazism which brought them into conflict with others.

RSS is the major paramilitary orgnisation of Sangh Parivar, its educational wing “Vidya Bharatiya” has more then 30 thousands educational institutes, through which they promote Hindutva ideology, they promote teaching of a booklet containing map of India that encompasses Pakistan, Bangladesh, Nepal, Bhutan, Tibet & some part of Myanmar under heading “Akhand Bharat or Punya Bhoomi Bharat”. BJP was established in 1951 as RSS’s political wing, earlier known as Bharatiya Jana Sangh (BJS).

After came into power in 1998, BJP recruited at large RSS, Bajrang Dal, VHP & other allied wings oath taken activists into Civil services specially in Police, Forces, Judiciary, Broadcasting, Education, Trade & Commerce, Foriegn Services etc who are loyal to Hindutva ideology its therefore thousands and thousands of incident are  circulating  through social media no one to accused has punished in lynching ,rape ,torture agitation cases No one has escaped from Hindutva terrorism ,there has been saveral hundreds incidents of mass murder and systematic prosecution of christian are on record score of nones raped ,dozens of churches demolished by Hindutva terrorists, a famous tragic engineered murder of Graham Stein alongwith his two infant sons who were burnt alive, hindutva pseudo secular media & BJP’s Govt tried to hide this.

More then 300000 three lacs innocent sikhs were brutally killed, Scores of hindutva terror cases of blasting, lynching, ablazing are on record, State & media always protect terrorists, clearly means that terror is state’s policy under hindutva ideology. Now it is the turn of Kashmiris Holocaust who have been victimized since seven decades, scores of massacres, thousands killed, torture, systematic falsely prosecuted, thousands of women raped by indian forces in Kashmir & black laws like PSA, AFSPA gives impunity to such heinous crimes. Kashmiri Hurriyet Leader gave S.O.S call but the world sleeping as the hindutva terrorists believed on Nazism, Ex supreme leader of RSS Golwakar stated “if hindu will grow stronger then Muslims will have to play role of German Jews” likewise MahaSabha Party proclaims “For the revival of hindutva supermacy, there is German’s solemn idea” in view of this ideology such orgnised state sponsored terrorists are threat to humanity.

In Kashmir there have been curfew since 5 August & complete media, social media blackout, what is goin on there? No one knows but as hindutva chronic there would be great genocide of Kashmiris by hindutva terrorists who were sent in forces uniforms & as amarnath pilgrimagers. In face of such threat humanity can’t afford to be silent If world have nt taken immidiate action there would be another Holocaust & thousands innocent women be raped by Indian state sponsored hindutva terrorists.