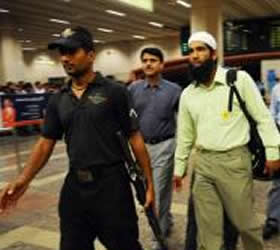 One-day captain Shahid Afridi on Friday called Pakistan’s scandal-marred tour of England the “most difficult” of his career as the team staged a low-key return home after four gruelling months away.

Coach Waqar Younis also conceded that it had been a punishing tour “on and off the field” after corruption investigations engulfed the side, triggering a barrage of condemnation from the press and public.

An exhausted-looking Afridi flew in to Karachi with three team-mates while the rest of the squad arrived in Lahore in the early hours, with a phalanx of gun-toting policemen escorting the players out of both airports.

“It was tough because of the controversies and became very difficult to cope with, because every time we went out of the hotel people passed remarks against us,” Afridi told a scrum of reporters in Karachi.

“Because of the controversies on the tour, it was the most difficult tour of my 14-year career,” the explosive all-rounder added.

The tour ended on Wednesday with Pakistan losing the one-day series 3-2. England also took the Test and Twenty20 series.

The tour will be remembered less for the on-field play and more for the off-field revelations by British tabloids that sparked investigations by Scotland Yard and the International Cricket Council (ICC).

Allegations of spot-fixing in the Lord’s Test against England engulfed Test captain Salman Butt along with bowlers Mohammad Aamer and Mohammad Asif. All three were questioned by British police and returned home early to Pakistan.

The ICC launched another probe into a suspicious scoring pattern by Pakistan in the third one-day match at The Oval on September 17, prompting Pakistan’s cricket chief to hurl corruption allegations in turn against England.

The Pakistan Cricket Board on Thursday hired lawyers to reply to a legal notice filed by English officials demanding an “unreserved apology” over the allegations by PCB chairman Ijaz Butt.

Butt had accused England players of deliberately losing The Oval match in return for “enormous amounts of money”, prompting passionate denials by England. There was also an off-field altercation between rival players.

Afridi said team unity had remained intact despite the storm of controversy.

“The best part of the whole tour was that the players showed unity even in difficult times and gave a good fight in the one-day series against England,” he said, while also hinting at a return to Test cricket.

“I will think about it and if the team needs it, I may consider playing the Test series against South Africa,” he said, ahead of the Proteas encounters starting late next month on neutral turf in the United Arab Emirates.

Foreign teams have shunned tours of Pakistan since Sri Lanka were attacked by gunmen near Lahore’s Gaddafi stadium in March 2009. Seven Sri Lankan players and a coach were wounded in the attack, which killed eight Pakistanis.

Pakistan began their troubled summer tour with matches against Australia in England, winning both Twenty20 matches and squaring the two-Test series 1-1.

Waqar, one of Pakistan’s greatest bowlers, said the tour’s length had taken its toll.

“If you take into account the tour to Sri Lanka before we went to England, it was four months on the trot and the tour of England was difficult both on and off the field,” the coach said on his arrival in Lahore.

“We had successes against Australia which were pleasing,” Waqar added.

“But because of the controversies it was tough against England, because you need to go to extra effort to gee up the players when you see a report in the newspaper every other day.” – timesofindia