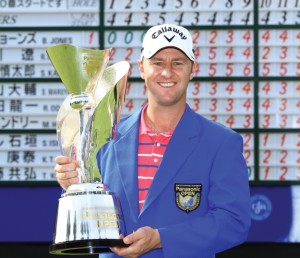 Starting the third and final round three strokes off the lead, the 35-year-old Jones fired a closing round of five-under-par 66, the week’s lowest, to lift his ninth career title in Japan by one at the Rokko Kokusai Golf Club’s East course.

Overnight leader Ryuichi Oda carded a 70 to finish second in the ¥150,000,000 (approximately US1.7 million) event jointly sanctioned by the Asian Tour and Japan Golf Tour.

Title holder Daisuke Maruyama put up a solid defence by sharing third place, a further shot back, after a 69 with Korea’s Kim Kyung-tae (67) and countryman Sushi Ishigaki (68).

Korea’s Noh Seung-yul, the Asian Tour Order of Merit leader, settled for joint eighth place after a 71 while Japan’s number one and top draw Ryo Ishikawa, who held a share of the lead early on, faded to a 73 for equal 13th place in the tournament reduced to 54 holes after bad weather forced the cancellation of play on Thursday.

Jones, who totaled six-under-par 207 for the week and won US$356,000, was beaming with joy after ending a two and a half year title drought.

“I’m so excited to have finally won again. The last two and a half years have been a bit of a dry spell. I’ve played well but not quite well enough to win tournaments. It’s finally good to lift another trophy,” said the Aussie, who is a regular on the Japan Golf Tour.

A bogey on his opening hole wasn’t the best of starts but he holed out from the greenside bunker for eagle on the fourth which sparked his title charge. Three more birdies against a bogey saw him turn in 32 but it wasn’t until he birdied the 13th and 14th holes that Jones was on top of the leaderboard for the first time all week. You know, I feel good in the bunkers around here and I’ve been playing very well. That was a bonus to make the eagle. I putted a lot better this week and that’s the thing. When I putt well, I win tournaments and I haven’t putted well for a long time,” said Jones, who needed 26 putts during the final round.

He parred home the last four holes, including a vital up and down from the back of the green on the demanding 18th hole to secure his victory. “That last hole, when I made up and down, that was a fantastic feeling. At that stage I was two ahead and I thought that would be enough but Oda and Maruyama made it interesting for me,” added Jones, who enjoyed four top-10s in Japan before his victory today.