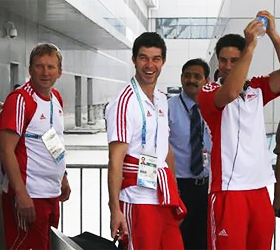 England Commonwealth Games athletes and officials have been banned from wearing Team England clothes outside of Games venues in New Delhi as intelligence officials warn of increased kidnapping risks to Britons, Australians, New Zealanders and Canadians in the Indian city.

But England chef de mission Craig Hunter said his team’s response to the secur-ity alerts had been tempered by not wanting to embarrass the Games hosts, particularly as the next Commonwealth Games are in Glasgow and the next Olympic Games are in London.

He told Telegraph Sport: “We are committed to participating and we are looking at security knowing we have Glasgow in 2014 and London in 2012 and any actions that are taken are taken on the understanding there are robust security measures in place to guarantee the safety of the athletes competing.

“It is important everyone is in a good place (mentally) and feels safe and secure. At the moment I believe the security of the athletes is robust and at an appropriate level.”

The 565-strong team has been supplied with Adidas-branded red and white clothing, but the athletes have been told they can wear the official team kit only when they are inside the athletes village, or on secure Games transport to venues.

England officials said the athletes would be allowed to travel outside of the Games venues but only in small groups, despite recent intelligence sources suggesting Britons could be at an escalated risk of kidnap by terrorists sympathetic to Al-Qaeda.

Other teams are reviewing their rules in allowing athletes to attend a daily tour to the Taj Mahal. Australian team members are banned from shopping at local markets which are considered a soft target for terrorists.

Reports from Australia say that Australian authorities have received intelligence about a plan by terrorists linked to Al-Qaeda to take foreign hostages, including Britons, as reprisal for the country’s activities in Afghanistan.

“It is okay to wear the Games kit when they are in Games accredited vehicles going to venues, training and competition but it is the same situation as in Beijing at the Olympics, the athletes venturing outside of the secure areas are not to wear the team kit,” England press official Caroline Searle said.

The Foreign Office says there is a high risk of terrorism in New Delhi. Embassy officials have been providing a daily security briefing to the England team.

“We have highlighted the particular risk that terrorists will attempt attacks in the run-up to and during the Delhi Commonwealth Games,” a Foreign Office spokesman said.

Searle said that in the first week “many athletes are training and competing and don’t have the time or the desire to go outside and have a look around”.

Roger Henning, the spokesman for counter-terrorism and security consultants Homeland Security Asia-Pacific, who has been advising some Australian clients, said: “There is a risk of terrorists kidnapping trophy tourists from Australia, New Zealand, Canada and the UK. There is also a real possibility that a terrorist group could abduct a small group, or even a busload of tourists, generating global publicity for their cause.”

The security at the Games village is extremely tight with armed army officials conducting indepth searches on the four-ringed perimeter surrounding the athletes’ accommodation.