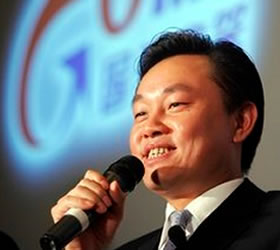 Once considered the country’s richest businessman, with a fortune estimated at $6.3 billion, Huang — also known by the Cantonese name Wong Kwong-yu — is serving a 14-year sentence in Beijing for insider trading, bribery and other crimes. That hasn’t stopped him from winning plenty of public support, though, as he feuds with his successor.
The two sides will face off in Hong Kong on Tuesday, when Gome’s shareholders are meeting to vote on whether to replace Huang’s successor and former protege, Chen Xiao, and another top executive, with Huang’s sister and one of his lawyers. Shareholders also will decide on a resolution proposed by Huang to revoke a “general mandate” allowing the company to issue new shares without first offering them to current shareholders — a practice that can dilute the value of their holdings.

Huang’s battle with the board reflects the frequently arbitrary nature of China’s judicial system, which often imposes very harsh penalties for nonviolent crimes, but also apparently allows business moguls to carry on with wheeling and dealing from behind bars.

Huang’s retail chain, Gome (pronounced “guo-may”) literally means “country beautiful.” But the battle over the company’s future has been anything but pretty. Gome’s Hong Kong-listed company is suing Huang for damages stemming from his conviction for economic crimes and his maneuvers from prison to exert control over the company. Huang has countered by threatening to sell about 380 stores, out of Gome’s 1,100, that he privately owns — a move that would undermine the company’s dominance in the mainland market.

The feud is complicated by friction over the role played by a U.S. private equity company, Bain Capital, which purchased $233 million in Gome bonds that have since been converted into shares, giving it the right to appoint three of the company’s directors, including Chen. The deal with Gome netted it fresh capital at a time when the company was struggling to regain equilibrium following Huang’s arrest. But some shareholders suspect it may have made the company vulnerable to a takeover.

“Chen Xiao is just a puppet, and probably there are even more hunters in the shadows,” said Hu Gang, a former Gome executive who now is vice president of a Chinese auto company, New Electric Car Co. “Huang is very worried that his own empire will be sold off to some outsider.” “After all, Gome is a very attractive asset in the retail sector,” Hu said.

Born into poverty, Huang moved to Beijing from his hometown in southern China and built a fortune selling televisions, air conditioners, washing machines and other accessories of a modern, affluent lifestyle. The tycoon’s troubles arose after he branched into lucrative real estate and financial dealings, though authorities have disclosed few details of his crimes.

As he built up Gome’s size and reach, to a peak of about 1,300 stores, Huang acquired regional rivals, including Chen’s own China Paradise Electronics Retail, which was struggling at the time and eventually became a wholly owned subsidiary of Gome. In allying with Bain, Chen has angered some Chinese who feel he is betraying his one-time rescuer.

“Everyone can see Chen Xiao lacks the basic gratitude to Huang, who helped him out in the past,” said Yan Yiming, a lawyer and champion for investor rights in Shanghai. Just as many U.S. investors sympathized with homemaking maven Martha Stewart despite her 2003 indictment in a stock scandal, many Chinese view Huang as an entrepreneurial icon, and scapegoat.

“There is a lot of distrust in the government in China,” said Michael Young, a professor of management at Hong Kong Baptist University. While corruption obviously is not a problem unique to China, its troubles are much worse, he says. “And because there is less understanding of the market system, it is harder for people to tell who are the good guys and who are the bad guys,” he said.

Stewart, who gave up her corporate titles and served five months in prison and another five in home confinement, still plays a leading role in her company. Huang, likewise, is vigorously seeking to stay involved in Gome’s management, and to exercise his rights as its largest shareholder, with a 32.47 percent stake. Bain’s stake is at about 10 percent. His chief ally is his wife and business partner, Du Juan, whose three-year prison sentence was commuted by the Beijing High Court, allowing her release in August. The court rejected Huang’s appeal. Authorities in Hong Kong, which as a former British colony has a separate legal system from the mainland’s, are still investigating the couple and have frozen their assets there.

In a recent open letter, Huang accused Chen and other top Gome management of mishandling the company and allowing Suning, its main competitor to grow faster. Without its founders’ involvement, “The company has clearly lagged behind its major competitors … and has lost much of the momentum that had enabled the company to rise from humble origins in 1987 to become China’s leading electrical retailer,” said the letter, released via a public relations company.

Gome reported its net profit rose 66 percent over a year earlier in the first half of the year, to 962 million yuan ($144 million). It was overtaken in size by Suning, whose profit rose 56 percent, to 1.97 billion yuan ($294 million). But given the widespread skepticism in China over financial reporting, some question whether it has performed as well as it claims.

Ultimately, the strife between Huang and Chen is likely to hurt shareholders’ interests, said Hu. “The Gome empire may split or be torn to pieces,” he said. “Whether Huang or Chen comes out the winner, all will be losers,” he said – Yahoonews