Going a little too far! 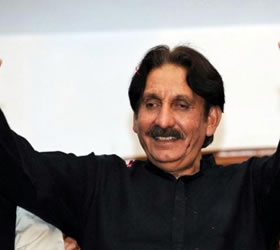 WHEN the top leadership of a country demonstrate their undignified disobedience of the rulings, which a judicial institution is tasked to dispense under the Constitution of the country, and do not hesitate even to publicly question its authority to do so, the lower rungs and less sophisticated political figures could be expected to blurt out their coarse criticism of it, with no holds barred. Their tongues, unleashed by the incitement they get from the utterances of their leaders, might reach out to other institutions of the state as well, with unsavoury, free-for-all lashings.
Minister Abdul Qayyum Jatoi, who was axed from the Cabinet by the Prime Minister for his uncontrolled criticism of the army and the Chief Justice, seems to have taken a cue from above and indulged in bizarre allegations. Or could it be that Mr Jatoi acted on behalf of someone else, who wanted to unburden, before the public, his angry feelings at the Supreme Court’s judgements and the murder of Nawab Akbar Bugti? Thus, the Minister for Defence Production became a scapegoat.

To berate the judiciary, Mr Jatoi, speaking during a news conference at Bugti House, Quetta, on Friday, doubted the moral ground of the SC on which it was deciding the fake degree cases of parliamentarians, and referring to Chief Justice Iftikhar Chaudhry said, “Is his own domicile not fake?” He accused the army of murdering Nawab Bugti. “We provided the army with uniform and boots not to kill their own country men, kill Nawab Sahib and Benazir Bhutto” and in this way he added a new dimension to the two cases.

Mr Jatoi’s assurance to Nawab Talal Bugti and Shahzain Bugti, who were present on the occasion that they should not be afraid of ‘boots’ because the Peoples Party knew how to make sacrifices, seemed to have a ring of creating an uncalled for climate of confrontation and distrust – Nation