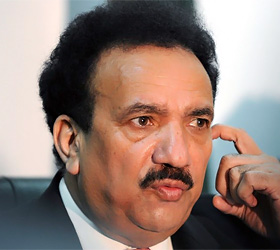 ISLAMABAD, Sep 27 (APP): Minister for Interior A. Rehman Malik Monday urged media to verify any news before its dissemination and avoid sensational news because it causes anxiety among the people.Clarifying his position about his resignation and shifting his family to London, the Minister informed the media here at a press conference that neither had he tendered resignation nor the Prime Minister asked him to do so. “I am not a beneficiary of NRO. I am not afraid of facing courts. I have already been acquitted in four out of six cases against me. Let the court to deicide the remaining cases and if the court convicts me I will give resign”, he said.

The minister said that we will give all respect to the court and we do not want any confrontation. All institution will be working in their limits. He said filling a case against any person does not bound him to resign until he is proved guilty. We should have to behave maturely,? he remarked.

He contradicted the report that Prime Minister Yusuf Raza Gilani had asked him for resign. If Prime Minister asked me I will do so as I respect my party leader?, he said. Malik said that he talked to Prime Minister after dissemination of the news on TV channels, but the Prime Minister confirmed that he did not took my name.
He said that he would meet with journalists unions to protest against dissemination of baseless news against him to defame him. The Minister warned that if I would be forced I would request President and Prime Minister to allow me to disclose something. However, he said I believe in consensus as envisioned my leader Shaheed Banazir Bhuttoo party leadership and I would prefer to remain silent.
He said the President and Prime Minister were given mandate by the people and we should have to respect the mandate, the political rivals should have to respect the mandate and they should use political tools for criticism.
He further said that it is unjustified that the media was making mockery of the President, Prime Minister and political leadership.  Malik said that he would file Rs. one billion damage suit against ARY TV channel for dissemination of false news of his resignation.
He further said, I did not shifted my family to London, rather my wife and son left for London last day because my son is a student of university in London and they both left Pakistan because his university was reopened after vacations – APP
Previous Post