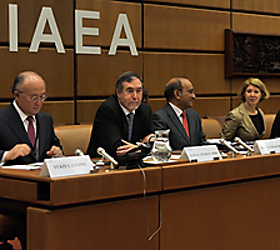 ISLAMABAD, Sep 27 (APP): Pakistan on Monday was elected, by consensus, as Chairman of the Board of Governors of International Atomic Energy Agency (IAEA) for the year 2011-12.Pakistan’s Dr. Ansar Parvez, who is Chairman of the Pakistan Atomic Energy Commission, will replace the Ambassador of Malaysia Mr. Dato’ Muhammad Shahrul Ikram Yaakob. “Pakistan’s election by a consensus is an acknowledgement of the positive advances it has made in the nuclear field. It is also a recognition of its active role in the Agency”, a foreign office statement issued here on Monday said.

Pakistan last served as Chairman of the IAEA Board in 1962-63 and 1986-87. The 35-member Board is the executive arm of the IAEA, besides being the highest policy-making organ of the IAEA. The Board will be dealing with a string of important issues this year. These include the Medium Term Strategy for 2012-17, the Technical Cooperation Fund targets for the biennium 2012-13 and the regular budget of the Agency.

Pakistan’s candidature had been unanimously endorsed by the Middle East and South Asia Group to which Pakistan belongs. It was unanimously approved by the Board this morning, the statement added – APP