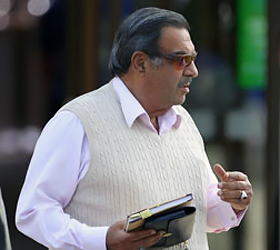 Yawar Saeed has resigned as Pakistan team manager following the side’s recent disastrous tour of England. His decision comes as no surprise after the ‘spot-fixing’ row which dogged the tour and the team’s performances. Pakistan were beaten on all fronts, losing the Test, one-day international (ODI) and Twenty20 series.

Saeed, 75, had managed the Pakistan team on numerous tours since the 1970s and was a member of the committee set up to investigate the poor showing in Australia earlier this year. As the team left London last Wednesday he appeared defiant about his future, saying: “I am not resigned, I’m not resigning and I will not resign.” But a statement from the Pakistan Cricket Board read: “Mr Yawar Saeed has requested to the Chairman PCB to be relieved of his duties as manager of the national team. The chairman has agreed to this request.”

The spot-fixing allegations involved Test skipper Salman Butt and pacemen Mohammad Asif and Mohammad Aamer. All three were questioned by Scotland Yard detectives following a News of the World undercover investigation that alleged spot-fixing during the fourth npower Test at Lord’s. Butt, Asif and Aamer were provisionally suspended by the International Cricket Council and returned early to Pakistan.