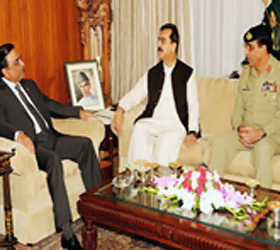 ISLAMABAD, Sept 27 (APP): A meeting between the President, Prime Minister and the Chief of the Army Staff (COAS) on Monday expressed resolve to defend and protect the democratic process and to resolve all issues in accordance with the constitution.The meeting held here at the Presidency was presided over by President Asif Ali Zardari. Prime Minister Syed Yusuf Raza Gilani and Army Chief General Ashfaq Parvaiz Kiyani attended the meeting that lasted for over 90 minutes.