The players are out p 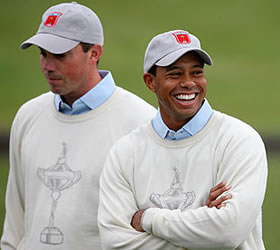 ractising this morning, with the Europeans starting at the 11th tee and the Americans on the 1st tee. Lee Westwood was playing with USPGA champion Martin Kaymer.

• Lawrence Donegan asks: “Will Colin Montgomerie be the first to crack in the phoney war of Celtic Manor?”

• With the American team showing off their new cream jumpers with very large Ryder Cup logos today Gregg Roughley runs the rule over great Ryder Cup outfits of recent years in this gallery.

USA’s “captainess” as Lisa Pavin is called (by her husband, the captain) has been making waves.

She also did a revealing interview and photoshoot with AvidGolfer. (AvidGolfer also hosts regular features such as Cart Girl of the Month and Bartender of the Month). – guardian