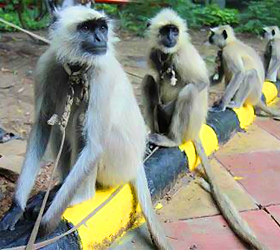 Trained langur monkeys are being deployed by organisers of the Commonwealth Games to prevent wild animals infesting sporting venues in Delhi. The highly intelligent primates have been patrolling stadiums and accommodation blocks to scare off other wildlife including wild monkeys, dogs and even snakes.
Handlers from miles around the Indian capital have been drafted in to patrol the athletes’ village as the final preparations are made for the games. Some teams threatened to boycott the competition after complaining that the accommodation was inhabitable and overrun with animals.

One shocked South African competitor even discovered a deadly cobra snake in his room. Heavy monsoon rains have caused flooding near the Games Village causing many snakes to seek refuge. Commonwealth Games organisers have also been particularly concerned by the arrival of packs of wild monkeys which have been creating a nuisance around the venues by stealing food and attacking humans.

Langur monkeys are noted for their intelligence but also their aggression and are highly effective in deterring other animals from taking up residence. The Commonwealth Games are due to get under way at the weekend and will be officially opened by the Prince of Wales – Telegraph