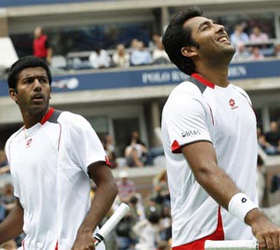 KARACHI, Sept 28 (APP) – Riding on the crest waves after his brilliant show in the US Open, Pakistan’s tennis star Aisam-ul-Haq Qureshi and his doubles partner Rohan Bhopana of India will play a doubles match against Bryan Brothers in Dubai in December to raise funds for the flood affected people in the country. “It is great idea and I am thrilled to be part of it to help my people affected by the floods,” he told APP at local hotel on Tuesday.
Lahore-born Aisam is the first Pakistani to reach the men’s doubles and mixed doubles final of any grand slam event in tennis history.
The event is being organised by a local private media group in collaboration with Times of India under its programme “Aman Ki Asha”  with also a hope to create brotherhood and understanding among the people of Pakistan and India. “We had preliminary meetings with the organizers and we may hold the event in Dubai in December,” Aisam, who reached the final of mens’ doubles and mixed in the US Open earlier this month in New York.

He said as Pakistan doesn’t have any big tennis stadium, Dubai can offer the best facilities and big venue for holding the match of this magnitude.
“It can attract community from Pakistan, India and other countries and can help in raising sufficient funds,” Aisam Qureshi said.

He said world top tennis super star Roger Federer and wife of former Captain Shoaib Malik, Sania Mirza reside in Dubai and they could be be part of the fund-raiser. “We are working on the plan and details and it will be finalized in due to course of time,” he said.

The chief organizer of the match, Shahrukh Hasan expressed the hope that keeping in the popularity of Asiam-Bhopana duo reasonable funds will be raised. “We want to help the flood victims through this fund-raiser and we hope it will be an instant success,” he said.