EU to decide on sanctions to punish budget rebels 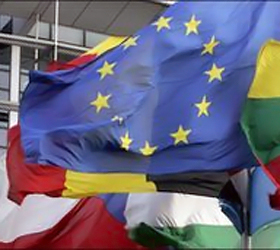 Tens of thousands of people are set to take to the streets of Brussels and other European capitals to protest at swingeing government cuts.
It comes as jobs across the public sector fall prey to unprecedented levels of government debt. The marchers will pass within sight of the European Commission building.

Inside, the EC will be weighing up plans to punish in the future those countries whose economies threaten to repeat the current difficulties. Just minutes before the shouts and whistles pass by the Commission, President Jose Manuel Barrosso will present new plans to prevent a “Greece” ever happening again.

Economic management:
Some of the EU plan is straightforward.

No one doubts that Greece consistently “misreported” how much it was borrowing so there will be a drive to make sure EU countries aren’t massaging their statistics. More controversially however, President Barrosso will outline plans to punish eurozone countries which either borrow too much money or fail to manage their economies properly. The desire to crack down on debt will come as no surprise to anyone who has been looking at the European economy for the last two years.

Huge debts:
But the proposed punishments will raise eyebrows.

Any eurozone country with a national debt consistently above 60% of GDP could be whacked with a fine. The size would vary from country to country but in France’s case it would be around 400m euros. Now, this all makes sense when looking at countries like Greece and Italy which racked up huge debts in the good times.

Property bubble:
But it doesn’t solve the problems of a country like Spain.

Spain never was a debt glutton and actually ran a budget surplus in the years leading up to the crisis. But that didn’t stop it being fingered by international investors as a big debt risk. Why? Well quite simply because property prices collapsed, and the construction sector – a huge part of the economy – quickly followed. In other words there was a massive property “bubble”.

The situation was similar, if not worse, in Ireland. It is precisely because of this kind of problem that the commission is looking to monitor what it calls “economic imbalances”. If a country is seen to fostering a bubble, or perhaps letting wages rise too quickly it could face a reprimand, and ultimately a fine. Some will find this kind of intrusive approach to a sovereign state’s economy anathema. However, the commission will simply point to Greece and Ireland and ask – “would you prefer this?”

Urgent task:
But even if the member states swallow being told that their economies are imbalanced, the biggest hullabaloo will be saved for how the punishments for misbehaviour kick in. The commission wants sanctions to be automatic but with a possible escape route if a transgressor can persuade other eurozone countries to let it off.

But automatic sanctions will be tough to take – with the French pointing out when fines are involved elected politicians should have the ultimate say, not unelected bureaucrats setting rigid rules. Nevertheless, if anyone wants a reminder of how urgent a task tightening the rules for the eurozone really is, they will only need to step outside the commission building and watch the thousands of angry protectors passing by, worried about their jobs and the prospects for their futures – BBC