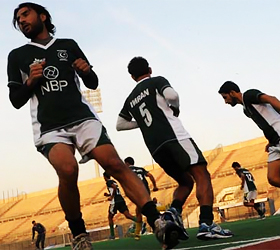 LAHORE, Sept 28 (APP)- Reliable defender Zeeshan Arshaf will lead Pakistan hockey team in the Commonwealth Games in which the green shirts will play their inaugural match against little known Scotland on October five at New Delhi.

Zeeshan passed a fitness test after fully recovering from a hamstring injury to dispel the doubts that he would miss the mega event. Right half Kashif Javed suffering from an ankle injury is also part of the 16-member team named on Tuesday by Pakistan Hockey Federation.

“ Both (Zeeshan and Kashif) were injured during recent tour of Europe and with ample rest and treatment they are now fully fit and selectors and team management have recommended their inclusion in the squad “,said a spokesman of PHF while talking to APP.

“ PHF Selection Committee led by Hanif Khan has approved the 16 member team which will be leaving tomorrow,Wednesday for India “,he said.  Hanif Khan said that after observing the performance and fitness of players during the European tour the selection committee has finalized the final team. “ This squad has the capability to reach to the victory stand of Commonwealth Games and we hope that the players will not disappoint us”,said the former olympian.
Ten teams are taking part in the event starting from October 5. Pool A comprises Australia, Pakistan, Malaysia, India and Scotland, while pool B features England, New Zealand, Canada, South Africa and Trinidad & Tobago.