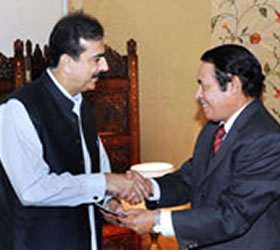 ISLAMABAD, Sept 28 (APP): Prime Minister Syed Yusuf Raza Gilani on Tuesday expressed his gratitude on the generous contribution in cash and kind from the brotherly people and leadership of Indonesia to help the people in distress in Pakistan.  He was talking to Ambassador of Indonesia Ishak Latuconsina, who presented him a cheque of US $ 1.73 million for Prime Minister’s Flood relief Fund 2010 here at his chamber in the Parliament House.The Ambassador conveyed sympathies of his governent and people over the colossal loss of lives and property in the devastating floods and assured the Prime Minister of his country’s complete solidarity in their hour of trial.
The Ambassador informed the Prime Minister that his government had supplied relief goods worth US $ one million on Aug 6 for the flood victims and had dispatched two teams to Charsada affected areas to provide medical care to the flood victims of Khyber Pakhtunkhwa. He said Indonesia would continue assisting Pakistan in the future for the rehabilitation and
reconstruction phase.
Prime Minister Gilani said the government had embarked on early recovery phase in the flood affected areas and was faced with the gigantic task of reconstruction. The assistance from friendly countries like Indonesia, at this juncture was indeed a source of solace for the government and people of Pakistan. The Prime Minister asked the Ambassador to convey his personal thanks and regards to President Dr. H. Susilo Bambang Yodhoyono for his kind gesture.

The Prime Minister said his government greatly values Pakistan’s cordial ties with Indonesia based on historical and religious bonds. Pakistan was keen to further strengthen these fraternal relations and existing bilateral cooperation in diverse fields for which his government will continue striving towards that end – App