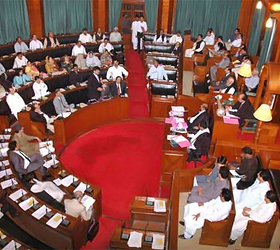 Karachi—A bill for the adjournment of local bodies polls for an indefinite period was approved in Sindh Assembly on Tuesday. The bill was presented by Law Minister Sindh Ayaz Soomro. He cited the situation arising out of the unprecedented floods that caused widespread damage to infrastructure and agriculture in the province.

National People’s Party member Arif Mustafa Jatoi and Muslim League (Q) member Sheharyar Mahar opposed the bill and demanded announcement of the date of the election instead of indefinite postponement. The opposition members however did not press their demand and the bill was passed by the house unanimously.

The ANP continued boycott of the session. Awami National Party’s two members were absent after the party Monday announced to boycott the ongoing session of the assembly in protest against the postponement of by-elections in PS-94.

The members of Muttahida Qaumi Movement (MQM) were not present in the meeting owing to the rally taken out against Dr. Aafia’s sentence by a US court. Senior Minister Peer Mazhar-ul-Haq said that MQM members had been taken into confidence for this bill – Pakobserver