Gilani for more role to public reps in reconstruction phase 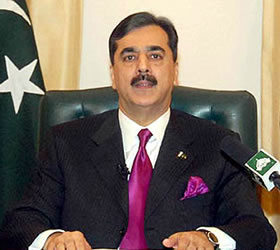 ISLAMABAD, Sep 29 (APP): Prime Minister Syed Yusuf Raza Gilani Wednesday said public representatives shall be given major role in the reconstruction and rehabilitation of the people affected by the worst ever floods of the country. Talking to Deputy Chairman Senate Jan Muhammad Jamali and Senator Haji Adeel who separately called on him at his Chamber in the Parliament House, Gilani said involvement of public representatives would ensure timely completion and raise morale of the people.

He said the government would take all stakeholders into confidence on the reconstruction strategy. He said Parliamentarians from the affected areas would be consulted and their suggestions incorporated to ensure efficiency and public welfare. He urged the Parliamentarians to come forward and lend a hand to improve the public lot.Gilani said with the overwhelming support of the people, philanthropists and organizations, the government has been able to provide timely and adequate relief including food to the affected people, while effective medical measures prevented outbreak of epidemics.

He was also appreciative of the international assistance and thanked the world community for its pledges at the UN forum. He said details of the reconstruction would be finalised after the damage need assessment through the World Bank and Asian Development Bank. Jan Jamali appreciated the Prime Minister for his efforts for the relief activities and initiative to take the political leadership along, for welfare of the flood affected people.