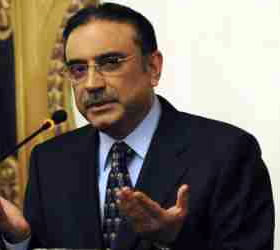 ISLAMABAD, Sep 29 (APP): President Asif Ali Zardari on Wednesday said that a one-time flood tax will have to be imposed on the well to do and people of means to help shore up the relief and rehabilitation efforts. “Unless we are prepared to share bread with our grief and disaster stricken brethren, we should not expect others to help us,” the President said while speaking to a women round-table meeting of federal ministers, women parliamentarians and representatives of non-governmental organizations for the flood affected people at Aiwan-e-Sadr.

He said that he has already advised the government to tap indigenous resources wherever there is room for taping such resources, adding that it should be done in a transparent and above board manner.The President said that the entire aid received and disbursed will be done in a very transparent manner and every citizen will have access to information relating to the aid received and distributed.Those who were present during the meeting included among others Speaker National Assembly Ms. Fehmida Mirza, Ms. Hina Rabbani Khar, Madam Faryal Talpur, Ms. Mehreen Anwar Raja, Senator Sughra Imam, Senator Nilofer Bakhtiar, Ms. Asma Arbab Alamgir, Ms. Nafeesa Shah, Ms. Fouzia Wahab, Ms. Shahnaz Wazir Ali, representatives of NGOs, Chairman NDMA, Lt Gen® Nadeem Ahmad and Spokesperson to the President Farhatullah Babar.

The President said that women’s voices must be heard and their concerns must be taken into account in shaping any disaster response strategy. He said that giving adequate representation to women in all forums would help in understanding women and girls’ specific needs and actions to be taken in this regard.

He said that besides giving representation to the women in all forums, a system needs to be evolved to inform and warn, in advance, the women and the children about the risks involved in case of non-evacuation of their areas during any natural disasters, on one hand, and to take care of their special needs during any such situation.

The President said that the experience of earthquake 2005 indicates that the women and the children are the worst sufferers during natural calamities and in many cases the grave impact of natural disasters on women and children is not fully recognized. He said that we all need to address the special nature of the issues of women victims of natural disasters. While focussing on provision of food, shelter, health, clean drinking water and sanitation facilities to the flood victims, we should also remember that the impact of disaster is much bigger for women and girls, the President said.
The President asserting that the women are most vulnerable in losing economic self-reliance due to natural calamities said that Benazir Income Support Programme should be used to address the women economic needs in the crisis situation.

The President also urged all the stakeholders to ensure women’s security in the relief camps besides ensuring safe transportation and privacy of spaces and the shelter for the women.
Stressing the need for adequate arrangement and urgent medical attention to women, the President observed that many Lady Health Workers were unable to perform their duties as they too were victims of flood disaster.

He called upon all relevant departments to ensure that medical needs of women are met.
He said that the government would ensure that women are protected from discrimination and exploitation at all times and during all stages of recovery and rehabilitation. He said that the Government needs support from all segments of society in this regard – App