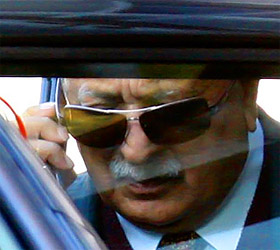 LONDON, Sept 29 (APP)- Chairman, Pakistan Cricket Board, Ijaz Butt has withdrawn his statement concerning the England and Wales Cricket Board and the English players who played in the third one-day international on September 17 at the Oval against Pakistan.He took back his remarks after both ECB and the English players demanded an apology from him after he told a television station he had heard from bookmakers that English players involved in fixing matches.  The ECB threatened legal action unless the PCB Chair  apologised. Following his meeting with ECB officials, a joint statement was issued here on Wednesday evening in which Butt stated : “I wish personally and on behalf of the Pakistan Cricket Board to withdraw the comments I made concerning the England and Wales Cricket Board and each of the England players who played in the NatWest One Day International at the Brit Insurance Oval on Friday 17 September.

It is regrettable that there was a misunderstanding arising from my comments.  I would like to make it quite clear that in the statements which I made that I never intended to question the behaviour and integrity of the England players nor the ECB nor to suggest that any of them were involved in any corrupt practices or in a conspiracy against Pakistan cricket.
In particular, I wish to make it clear that I have never seen any evidence of any wrong doing by any England player or the ECB at any time.  I deeply and sincerely regret that my statements have been interpreted to cast doubt upon the good names of the England players and the ECB and hope that this public withdrawal will draw a line under the matter. Butt said the ECB and its Chairman Giles Clarke have been and continue to be a friend of and hugely supportive of Pakistan cricket.  “I am very grateful for their efforts in that regard and for their hospitality this summer.
He further stated that PCB, like all other cricket governing bodies, are committed to a zero tolerance policy to corruption in the game and will continue to work hard with the relevant authorities to eradicate it. The ECB and the England players who played at the Brit Oval warmly welcome this withdrawal and now regard the matter closed. Clarke confirmed that following this statement he is continuing in his role as the ICC Pakistan Task Team  which at time looked doubtful following the eruption of this controversy.
Prior to that the statement the PCB Chairman consulted his legal advisers about replying to English demands that he apologise over allegations about match-fixing. Butt’s comments came after the International Cricket Council (ICC) said it was launching an inquiry into Pakistan’s scoring pattern in the third one-day international against England at the Oval.
Pakistan’s Test captain Salman Butt and his team mates Mohammad Aamir and Mohammad Asif had already been suspended after an investigation into a newspaper report that they had arranged for no-balls to be deliberately delivered during the fourth test at Lord’s in late August.
The PCB Chairman and legal advisor Tafazzul Rizvi have also met officials of Scotland Yard to know the progress it has made in its investigations into the allegations as reported by a British tabloid daily – APP
Previous Post