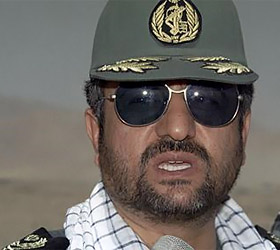 The Obama administration on Wednesday imposed sanctions against eight Iranian officials who are said to be responsible for or complicit in serious human rights abuses.  The list includes the commander of Iran’s Revolutionary Guards Corps.

The United States has been a sponsor of four U.N. Security Council sanctions resolutions against Iran because of its nuclear program. This action announced by Secretary of State Hillary Clinton and Treasury Secretary Timothy Geithner, however, marked the first time that Iranian political figures have been targeted by the United States for human rights abuses, including last year’s crackdown on election protesters.

Clinton told reporters that the officials named in an executive order signed by President Barack Obama are determined to have been responsible for serious and sustained human rights abuses, including arbitrary arrests, beatings, torture and killings. She said the “steady deterioration” of rights conditions has obliged the United States to speak out time and again against such abuses, and that a recently approved act of Congress permits the administration to sanction those in Iran behind such actions.

Clinton listed a series of recent Iranian moves against activists, newspapers and parties critical of Tehran authorities.  She said the actions fly in the face of assertions by Iranian President Mahmoud Ahmadinejad in New York last week that Iranians enjoy the right of free expression and that the country holds no political prisoners.

“In signing this executive order, the president sends the message that the United States stands up for the universal rights of all people,” said Secretary of State Clinton.  “And as President Obama said at the United Nations last week, we will call out those who suppress ideas.  We will serve as a voice for the voiceless, and we will hold abusive governments and individuals accountable for their actions.”The eight Iranian figures named in the Presidential action, including Revolutionary Guard Corps commander Mohammad Ali Jafari, would be barred from U.S. travel or financial dealings, and any property they might have in the United States would be frozen.

The action is unlikely to have a major immediate impact on those named.  But Treasury Secretary Geithner said European and other countries are likely to support the blacklist, and that cumulative nuclear and other sanctions on Tehran are now being felt there.

“We have found that when we single out individuals and expose their conduct, banks, businesses and governments around the world respond by cutting off their economic and financial dealings with these individuals, these institutions, these businesses,” said Geithner.  “And this strategy can be very effective.  We’ve seen a growing number of companies and financial institutions in countries around the world cut or substantially curtail their financial ties with Iran.”

Clinton discussed Iran earlier in the day with European Union chief diplomat Catherine Ashton.  Both said they hope to see an eventual Iranian return to negotiations over that country’s nuclear program, but that recent Iranian expressions of interest in renewed dialogue have not been followed by any message to that effect to the E.U – Voanews