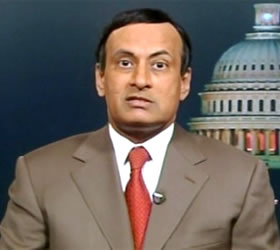 WASINGTON: Pakistan’s Ambassador to the United States Husain Haqqani discussed Pakistan-U.S. relations and Afghanistan with Special Envoy Richard Holbrooke Friday morning, hours before the American diplomat felt ill while at work at the State Department. Haqqnai told CNN that at their breakfast meeting on Friday, Holbrooke showed no signs of illness and that the two diplomats discussed Pakistan-U.S. relations and things that were coming up in the future.“It’s one of those things that took us all by surprise. We are all praying for him. And we hope that he will have an early and full recovery,” Haqqani said.Richard Holbrooke is in a critical condition at George Washington University Hospital after doctors performed surgery to repair a tear in his main artery, aorta.

The Pakistani ambassador commended the American special representative Holbrooke’s understanding of some complex issues in the region and said he looks forward to discussing Pakistan-U.S. ties with him in the future.In answer to a question, Haqqani said Islamabad stands for stabilizing Afghanistan and wants that its western neighbor does not become a source of instability for Pakistan once the international forces’ leave the Afghan land.
“I think that Pakistan and the United States have already worked out a lot of challenges. We are much closer today than we were say two years ago,” the ambassador said as the Obama Administration worked to come out with a review of its policy toward Pakistan and Afghanistan next week.Pakistan, Haqqani said, understands America’s concern about stabilizing Afghanistan as soon as possible.“And we share that concern. We’ve been working together to strengthen Pakistan’s military capability, Pakistan’s own economy and Pakistan’s fledgling democracy and on all of those issues; Ambassador Holbrooke has shown understanding of the buck.”At the same time, the envoy noted, Pakistan has some concerns about Afghanistan “not becoming a center of instability for Pakistan in the future, if and when American and NATO troops leave that country.”Haqqani said Pakistan has shared these concerns on a regular basis – App