An oasis and an island steeped in history 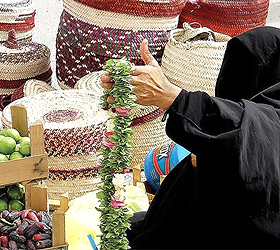 It was water and trade that put Saudi Arabia’s dusty green and fertile Qatif region on the map. Testified by archaeological digs that have unearthed primitive Stone Age tools and cooking utensils, the land surrounding the modern day city of Qatif has been inhabited since at least 5,000 BC, making it one of the longest settled quarters on the Arabian Peninsula. The fruitful 10,000 acre oasis, which extends onto the island of Tarut, holds a vital source of life beneath the sands in the form of freshwater. Originally, there were some 130 wells (“ain” in Arabic) irrigating the earth and providing sustenance for the people and their livestock. Today more than half of these wells have dried up; yet, enough water remains for agriculture to carry on and prosper.

Qatif’s geographical location — with a deepwater harbor at Dareen on Tarut Island — denotes that merchants have coveted the region ever since the Middle Ages when trade passing through the Arabian Gulf flourished from India to what is modern day Iraq. In Dareen, the goods were loaded onto camels and carried across the desert lands to the Mediterranean coast, and from there, into Europe. During Ibn Battuta’s mammoth 30 years expedition — a story put down on paper in the epic book, “Rihla” (The Journey) — en route to Afghanistan, India and China, the legendary Moroccan Berber visited the metropolis of Qatif in 1331. There, he found a bustling and prosperous city inhabited by Arab tribes who he described as “Shiite” in an area that 700 years later retains the largest concentration of Shiite Muslims in the Peninsula.

By the 15th century, Portugal had cast its beady eye on the Gulf. While the Spanish archenemy (led by Christopher Columbus) pushed west to the Americas, the Portuguese turned their attention east aiming to control the lucrative trade in spice and incense. Until 1521, the Qatif oasis had been a province of the Kingdom of Bahrain controlled by the Jabrids — a Bedouin dynasty that was based in Al-Hasa and who ruled most of eastern Arabia. However, when the Portuguese displaced the Jabrids, the region was briefly controlled by Lisbon whose regime focused too much attention on the command of the Straits of Hormuz. The Portuguese were eventually kicked out by an Anglo-Persian force in 1602.

Qatif was used merely as a transit point where fresh food and water could be taken on board. Consequently, when the Ottoman Empire (who were keen to run the Gulf their way) attacked the oasis in 1551, they found no army to oppose them. From that time on, Qatif was established for future centuries as the most important town and port in this stretch of the Arabian Gulf. It became somewhat of a wrestling match between the Turks and indigenous Saudi tribes hoping to establish their own state — a feat achieved albeit briefly in 1744 (the First Saudi State) and 1824 (the Second Saudi State).

By the 20th century, once oil had been discovered alongside the drinking water, Aramco arrived on the scene and the face of the Qatif oasis was changed forever. A huge refinery was established across the bay in Ras Tanura (Head of Skirt), which was soon producing 800,000 barrels of oil a day. Additionally, offshore, man-made islands were being shaped. The first, known as “Sea Island,” with an overall length of 1.1 miles, has berths for eight supertankers and a loading capacity of 439,000 barrels of crude oil an hour, making it one of the largest offshore oil loading facilities in the world. Before long another unit was added, called Sea Island 4, which was constructed in the shipyards of Japan and then towed on a 40 day, 9,000 mile journey to Bahrain. The entire complex, which looks like a huge, floating, ten-legged table, was turned upside down and pulled across the shallow waters of the Gulf to Ras Tanura where it was turned the right way up, and the legs were hammered into the sea bed 90 feet below.

Between 1948 and 1955, when the petroleum operation had been established, the Saudi government and Aramco waged war on and eradicated the Sterne mosquito which thrived in the damp surroundings of the oasis and infected humans with a particularly virulent form of malaria. They also soon drilled for water as well as oil to help out local farmers.

These days, a visit to Qatif City — located just 25 kms to the north of the dense conurbations of Dammam and Al-Khobar — provides an enjoyable day trip. First stop is the weekly Thursday morning market known as Suq Alkhamees, but be warned that trading winds up by 11 a.m. Here, farmers sell a wide range of crops, including dates, limes, sweet bananas, grapes, pomegranates, figs, tomatoes, okra, radishes and onions alongside pirated DVDs, which haven’t even reached the silver screen yet. Live animals are also available. Monkeys sell for SR500, snakes for SR700, dogs for SR3,000, while birds can fetch anything up to SR10,000. There is also a brisk trade in bulk spices, incense, nuts, candy, handmade baskets and wreaths of basil leaves. An antique corner displays artifacts ranging from rusty old teapots to even rustier swords (Qatif was noted for its locally produced weapons such as spears and daggers), big, black 1950s telephones, as well as clothes, rugs, piles of dried tobacco and shisha pipes.

After the shopping is done, head across to Tarut (goodness and beauty) Island, formerly approached in a dhow — now on a causeway — and named by the Phoenicians after Ishtarut, their diety of love. An ancient gold statue depicting her was found in palm groves and is now displayed in the Riyadh Museum. The area of the island is small — six by six kms — with a population of 38,055. Its deep harbor is now silted up, but for thousands of years ships have set sail from here to the Indian Ocean and East African coast laden with a bounty of Tarut’s renowned pearls, the blue gemstone lapis lazuli, terracotta and gypsum, which is prevalent in saline waters and used for centuries in ornamental masonry.

Storks and flamingos wade in highly salty and shallow water flats while beneath the surface the sea is carpeted by vast grassbeds (66 percent of Tarut bay is covered by this plant) that provide large amounts of energy available to shrimp, oysters and turtles. The energy is calculated to total 140 billion calories per year, or as much energy as in 95,000 barrels of crude oil. It is in these grassbeds that from spring until summer, young shrimp, with a high tolerance to toxins in polluted areas, find shelter and spawn and feed — their body weight increases 2,000 times during this period. Then, the fishing vessels arrive for the fattened catch and the shrimping season lasts from July to October. During the winter months, the boats (dhows) are still made and repaired in the traditional way at Dareen on the south side of the island. The fish market on Tarut is one of the most important fishing centers in the Arabian Gulf and is also the Kingdom’s main supplier of fish — especially shrimp. Opening after sunset prayer, it offers catches of mainly kanad, hamoor and shiri.

A couple of sandstone forts remain on Tarut, even if dilapidated and crumbling back into the sands they came from. The castle in Tarut village in the island’s center was originally built by the conquering Turks in the 16th century, although it is mistakenly referred to as the Portuguese fort. The present structure was rebuilt on the hillock in 1885 with two and a half meter thick, nine-meter high walls on top of a still productive freshwater natural spring known as Al-Awda that in the past was solely for the use of women. Today, the local government has filled in the open channels and capped the well, from which water is now piped underground to the entire village. The castle is encompassed by a cluster of three-story adobe buildings complete with ramshackle, wooden toilets hanging off the outside walls. The houses also have beautiful examples of traditional and highly decorated Bedouin style doors and windows.

Standing next to the fort, it is easy to imagine the area in former times. With an elaborate system of inland waterways pushing water around the settlement and inhabitants doing their household chores in the shade of the palm fronds, drawing water from the wells for washing while the children splash and play. As our guide Hassan Al-Hashim commented wistfully, “When I was a boy, we used to swim in the canals with our donkeys.” – Arabnews

1,436 students to get interest-free loan: SBP

1,436 students to get interest-free loan: SBP