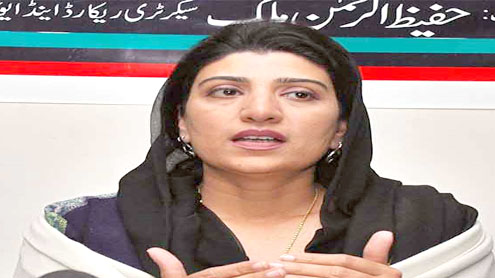 ISLAMABAD: Chairperson Benazir Income Support Programme (BISP) Farzana Raja has said that BISP is a comprehensive social rehabilitation programme which enjoys constitutional cover as well as the trust and confidence of the people of Pakistan.In statement here on Monday, she said the BISP programme is approved by the both houses of the parliament and it is striving hard to enable poor segments of society live a self sustained life through its innovative initiatives i.e Waseela-e-Haq, Waseela-e-Rozgar and Waseela-e-Sehat besides regular monthly income support.She said that the BISP has launched Benazir Smart Card and Mobile Phone Banking as well to deliver income support in a more effective and transparent.She said that the BISP has contributed significantly to redress the problems emanated by devastating flood of 2010. She said that BISP come forward immediately to provide much needed relief to poor flood victims and one million flood victims who were registered with BISP as beneficiaries, received emergency relief grant.Farzana Raja, on the occasion, responded to various queries from the public and said that as a result of ongoing poverty survey throughout Pakistan, the number of beneficiary families registered  with BISP would rise up to 5 million.

She said that Benazir Smart Card and Mobile Phone Banking have been introduced in four districts of Pakistan on experimental basis and these modern delivery mechanism would be extended to all over Pakistan gradually.She said that health insurance would also be provided to all registered beneficiary families of BISP.Talking regarding political situation in Punjab province, Farzana Raja said that return of lota politics in Punjab is highly regrettable.She said that Shaheed Benazir Bhutto has signed Charter of Democracy (CoD) to strengthen democracy in Pakistan and persuaded her political adversaries to take part in the democratic process – APP

Learning from old bones to treat modern back pain

Learning from old bones to treat modern back pain