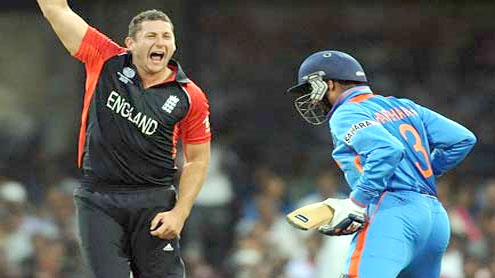 England’s Tim Bresnan has been officially reprimanded for breaching the ICC Code of Conduct during his side’s tied match against India in the ICC Cricket World Cup 2011 in Bengaluru on Sunday.Bresnan pleaded guilty to contravening Level 1 offence (Section 2.1.2) of the ICC Code of Conduct for Players and Team Officials which relates to “abuse of cricket equipment or clothing, ground equipment or fixtures and fittings”.The incident took place on the last ball of the 48th over when Bresnan, after he was clean bowled by Piyush Chawala, hit the stumps with his bat.As Bresnan accepted the decision without contest, there was no need for a hearing.Commenting on his decision, Mr Roshan Mahanama of the Emirates Elite Panel of ICC Match Referees, said: “While giving my verdict, I took into account that Bresnan admitted his mistake, apologised for his action and that it was his first offence.”Further, it was encouraging to note that Bresnan on his own initiative met the umpires concerned and reiterated that his action was unintentional.“However, there is no room for this type of action in our great sport and cricketers are always expected to play the game in the true spirit of cricket. These cricketers are role models of millions of aspiring cricketers.”All Level 1 breaches carry a minimum penalty of an official reprimand and/or a maximum penalty of the imposition of a fine up to 50 per cent of a player’s match fee.The charge was brought by on-field umpires Billy Bowden and Marais Erasmus, third umpire Rod Tucker and fourth umpire Aleem Dar who are all from the Emirates Elite panel of ICC Umpires.Meanwhile, the England team was fined for maintaining a slow over-rate in the same match.The fines were imposed by Mr Mahanama after Andrew Strauss’s side was ruled to be one over short of its target at the end of the match when time allowances were taken into consideration.In accordance with the ICC Code of Conduct regulations governing minor over-rate offences, players are fined 10 per cent of their match fees for every over their side fails to bowl in the allotted time, with the captain fined double that amount.As such, Strauss was fined 20 per cent of his match fee while his players received 10-per-cent fines.The offence is contrary to Article 2.5.1 of the code which relates to minor over-rate offences. The penalty was accepted by England without contest so there was no need for a hearing – BBC

Has Taleban lost its clout?