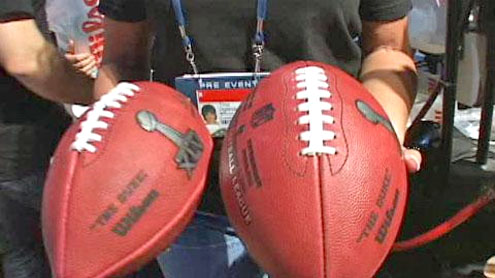 In these days of automation, it’s rare to see a company manufacturing its products completely by hand. Still, there are places where this happens. The National Football League wrapped up the 2010 season with the biggest football game of the year: Super Bowl XLV – played in a huge stadium in Arlington, Texas.But without the small, Midwestern town of Ada, Ohio — population 5,400 – the game would not have been the same.  Ada is where the Wilson Sporting Goods company makes footballs.  Wilson has been the official football maker of the National Football League since 1941, and many of the 130 employees at its factory in Ada have spent most of their lives there – many working for 25 to 45 years.Every year, during Super Bowl week, Wilson showcases a small piece of its factory for the fans.At this year’s display, fans could see five of the 13 steps it takes to make a football. One of the workers, Tina explains that after applying 120 pounds of air pressure the seams will be smooth and the laces flattened – Voanews